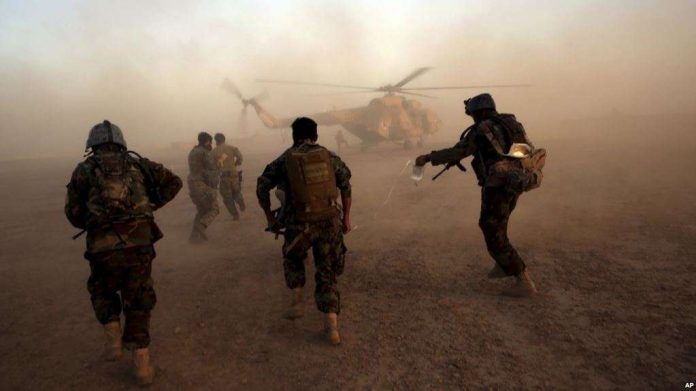 PESHAWAR: About 50 people lost their lives and over 40 others were wounded in clashes between the Taliban and Afghan security forces in Helmand province of Afghanistan on Saturday.

Afghan media reports said the Taliban launched attack on 215 Maiwand Corps in the southern province on Friday night and the ensuing clashes continued till Saturday evening. Provincial Governor Yaseen Khan said 23 security forces and 20 attacking militants were killed in the clashes. Officials said the clearance operation continued for too long because the retreating militants were hiding in different places at the military base.

The Afghan ministry of defence said eight of the attackers were suicide bombers who were eliminated. However, some reports in the Afghan media suggested that around 45 security men were killed in the assault.

Taliban claimed responsibility for the attack. Taliban spokesman Qari Yousuf Ahmadi said helicopter workshops were torched in clashes between the Taliban and Afghan security forces. He claimed that around 200 security personnel were killed in the clashes. However, he did not provide information about casualties in the Taliban. The militants are known for exaggerating their claims. No independent verification was possible of the claims made by both sides.

Meanwhile, talks between the Taliban and officials from the United States resumed in Doha, Qatar on Saturday after a two-day break.

Media reports said Taliban senior leader Mullah Abdul Ghani Baradar has also joined the talks as the new head of the Taliban team. He met the US special representative Zalmay Khalilzad for the first time on Monday.

Taliban spokesman Suhail Shaheen said Taliban have two core issues which are the withdrawal of all foreign forces from Afghanistan and no use of Afghan soil against the Americans and against its allies. He said the US has also been continuously asking for a Taliban ceasefire. The spokesman said the talks will go to next phase if no progress was made in the ongoing phase. One of the stumbling blocks is still the Afghan Taliban’s refusal to include the Afghan government in the talks process.