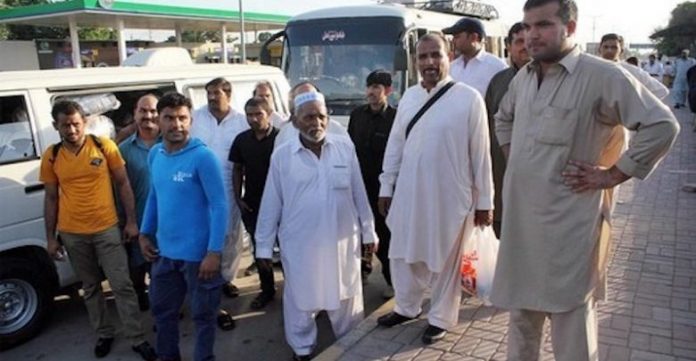 PESHAWAR: Parliamentary Committee was informed on Friday that 579 Pakistani prisoners have been granted “Saudi Arabian royal pardons” and were released from Saudi Arabia prisons.

Dr Aamir Sheikh, managing director of Overseas Pakistan Foundation further informed that overseas Pakistani representatives are in contact with Saudi authorities regarding the release of prisoners and their safe return to the country.

The National Assembly’s Standing Committee on Overseas Pakistanis and Human Resources Development has been provided information on the released prisoners to analyze the nature of their crime. Most of them were imprisoned for fraud, drug trafficking, illegal border crossing, stealing, pocket cutting and bribery. It was further informed that although one of them was involved in the rap case, most of the 579 released was sentenced to one to five years for drug trafficking and fraud.

According to officials, since the visit of Ehud Mohammed bin Salman this year 3396 prisoners were released from departure camps, along with 579 people who have been expelled from Mecca, Riyadh, Dammam, Tabuk. It is to be remembered that the Saudi Crusaders announced the release of 2,000 prisoners in February this year at the request of Prime Minister Imran Khan.

Foreign Ministry’s Director General (Middle East) Syed Zahid Raza told the sub-committee that was recently formed with the mandate to ensure the provision of legal assistance to under-trial Pakistani prisoners, in different foreign jails. “These prisoners were released from Saudi jails on the order of Crown Prince Mohammed bin Salman during his recent visit to Pakistan”, the committee was briefed.

Huge numbers of Pakistanis travel to the Middle East every year, with many working on construction sites or as domestic helpers.  Thousands of Pakistani workers are locked up in jails across the Middle East. Most of the prisoners are poor labourers who have no real legal recourse.