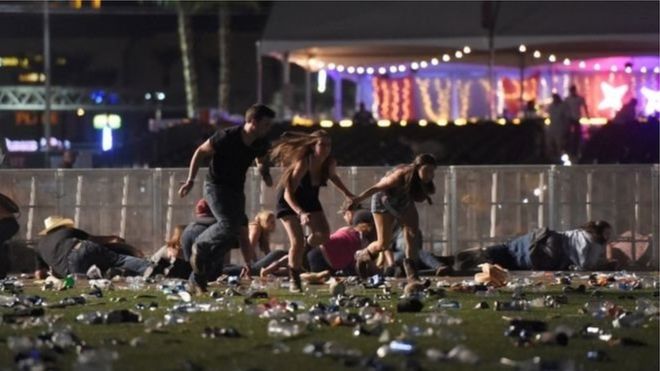 PESHAWAR, 02 October: At least 58 people were killed and more than 500 wounded when a gunman opened fire on a music concert in Las Vegas, United States, media reports said on Monday.

According to police, the gunman, identified as Stephen Paddock, a resident of Nevada, opened indiscriminate fire on the crowds below from the 32 floor of the hotel. This is the deadliest mass shooting incident in the history of the US, police said.

Police added that the shooter was also killed in retaliatory firing.

Video clips posted online showed people were enjoying music at the concert when all of sudden sounds of automatic weapons started and panicked concertgoers fled here and there.

The Islamic State group claimed in an online statement the responsibility of the massacre, saying it was carried out by one of its “soldiers” who had “converted to Islam. However, US officials said there was no evidence that the shooter had connections to any militant group. Officials said the shooter might had a history of psychological problems.

The Las Vegas international airport had temporarily halted flights after the shooting while the police had asked the local people to stay away from the site of the shooting.