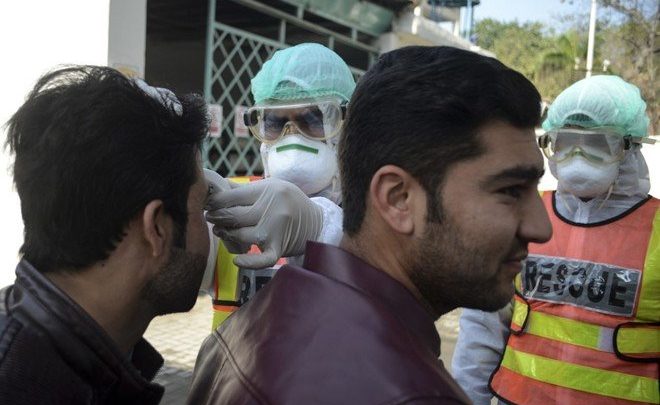 LANDIKOTAL: The Pakistani officials at the Pak-Afghan Torkham border on Friday deported at least six Afghan nationals to their country over having symptoms like coronavirus.

Officials said it emerged during investigation of six Afghan nationals that they were having health problems for the last few days and they had also traveled to China recently. After scanning, it was feared that the Afghan nationals might be having coronavirus as they had similar symptoms after which they were deported immediately as a precautionary measures to avoid the spread coronavirus in Pakistan.

There were also reports about some communication gap between the officials at Torkham border and health authorities in Khyber Pakhtunkhwa as exact data of cases is not available yet.

Torkham Border has been put on high alert after entry of a suspect coronavirus cases from Afghanistan. According to reports received from Khyber tribal district, a resident of Islamabad having symptoms like that of coronavirus returned from Afghanistan via Torkham border on Thursday. District Health Officer (DHO) Tariq Hayat told media that the suspected case was sent by the Torkham Border officials to Peshawar for special treatment. The patient will be kept in Peshawar for few days and then sent to Islamabad only after his full recovery.

The DHO said screening of all the people entering to Pakistan through Torkham Border is continuing and the border officials have been put on high alert. Two ambulances have been provided at the border which will be present there round the clock for any emergency situation. Further steps will also be taken at the border to enhance vigilance to avoid the spread of the deadly coronavirus.

Meanwhile, the tally of confirmed coronavirus cases in Pakistan has mounted to 28 after which the Pakistan government has closed all educational institutions and put ban on all public gatherings and functions.

So far, the deadly disease has killed nearly 5,000 people worldwide and over 131,500 are infected.

At least seven pilgrims returning from Iran via Taftan border are having coronavirus, while 15 cases have surfaced in Sindh, five in Gilgit-Baltistan and one each in Hyderabad and Quetta. Karachi is the most affected city with 15 cases.