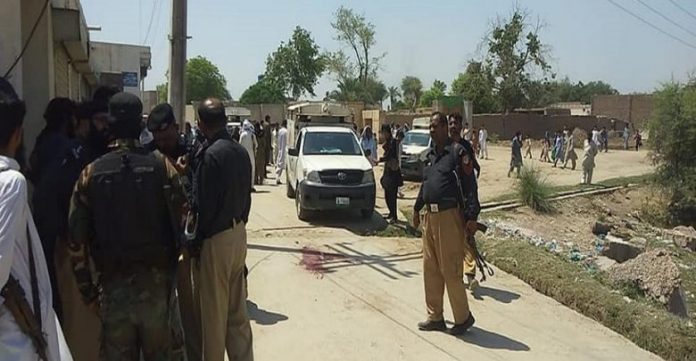 DERA ISMAIL KHAN: Six people lost their lives and three others were injured in exchange of firing between two groups in Dera Ismail Khan district of Khyber Pakhtunkhwa on Sunday.

Local sources said the firing incident happened over a dispute between two groups on turn of watering the fields. The members of Madozai tribe were watering the fields in Mangal area of Draban tehsil when members from Pakhakhel tribe came there. The Pakhakhel tribesmen told Madozai tribesmen that it is their turn to water the fields and Madozai people must leave the place. It led to exchange of harsh words and then both the groups exchanged fire.

The sources said Pakhakhel tribesmen initially opened the fire in which four people including Latif, Ahmed Shah, Habibullah and Asmatullah lost their lives and two other persons, Qayyum and Saleem, sustained injuries.

The armed tribesmen of Madozai also reached the spot and opened fire on the rival party. Two real brothers, Zahir Shah and Tahir Shah, lost their lives in the firing. Another person, Shahid sustained injuries.

The bodies and the injured persons were taken to hospital. Some reports suggested that another injured person succumbed to his injuries after which the death toll mounted to seven.

On Tuesday, a policeman was shot dead and his cousin was injured in a firing incident in the limits of Yarak Police Station in DI Khan.

Local sources said constable Muhammad Shahid along with his cousin Abdul Wahab was on his way home in Wanda Jamal when three men intercepted them and exchanged harsh words. The accused allegedly shot dead the policeman while his cousin sustained injuries. The sources said the reason behind the incident was a recent quarrel between children.

Police registered a case of the ancient and initiated investigation. However, the culprits could not be arrested.