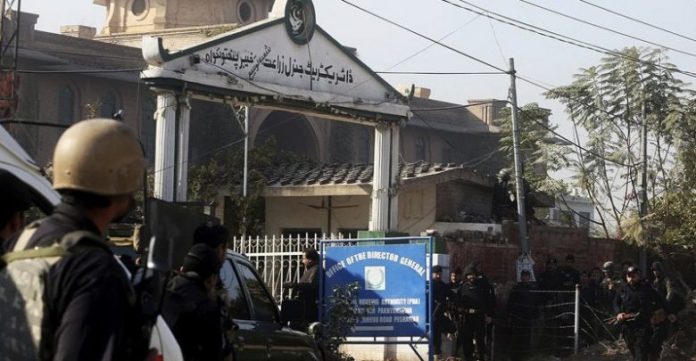 PESHAWAR: An Anti-Terrorism Court (ATC) in Peshawar has released six accused, including a woman, in a case pertaining to terrorist attack on the Directorate of Agriculture Peshawar.

In December, 2017, terrorists attacked the Directorate of Agriculture in which nine people lost their lives and 28 others were injured. The security forces arrested six suspects on suspicion of facilitating in the terrorist attack.

The Tehreek-e-Taliban Pakistan (TTP) had claimed responsibility for the attack.

The Anti-Terrorism Court had reserved verdict about the six alleged facilitators, which was announced on Wednesday. The six suspects have been released due to lack of evidence. The suspects were charged with aiding, abatement and facilitating the attackers that orchestrated the attack on the Directorate of Agriculture.

A man shot dead his sister-in-law over a domestic dispute in Buner on Wednesday.

Policemen at Daggar Police Station said they received information that a woman has been killed by her brother-in-law in Khasar Goga area. A police team reached the spot and shifted the body to Daggar Hospital for post mortem. The body was handed over to heirs after post mortem.

Police have filed a case against the suspect, Usman and initiated search for him.

On Monday, a girl, who entered marriage according to her own choice, was killed in the name of honour in Buner.

Police said they received information that the body of a young girl was dumped in a deserted place in Chalanderi, Pir Baba. The police took the body into custody and took it to Tehsil Headquarters Hospital Pir Baba for post mortem.

Police said investigation has been launched into the incident and facts about the matter would be unveiled soon. Sources said the father and brothers of the girl have been accused of killing her. The girl’s father, Alamzeb has been arrested, while brothers have escaped and search for them is continuing.

Last week, a girl was shot dead in the name of honour in the jurisdiction of Daggar Police Station. Police had arrested the brother, sister-in-law and uncle of the deceased girl on suspicion of murder. Sources said the arrested persons confessed to their crime during interrogation.