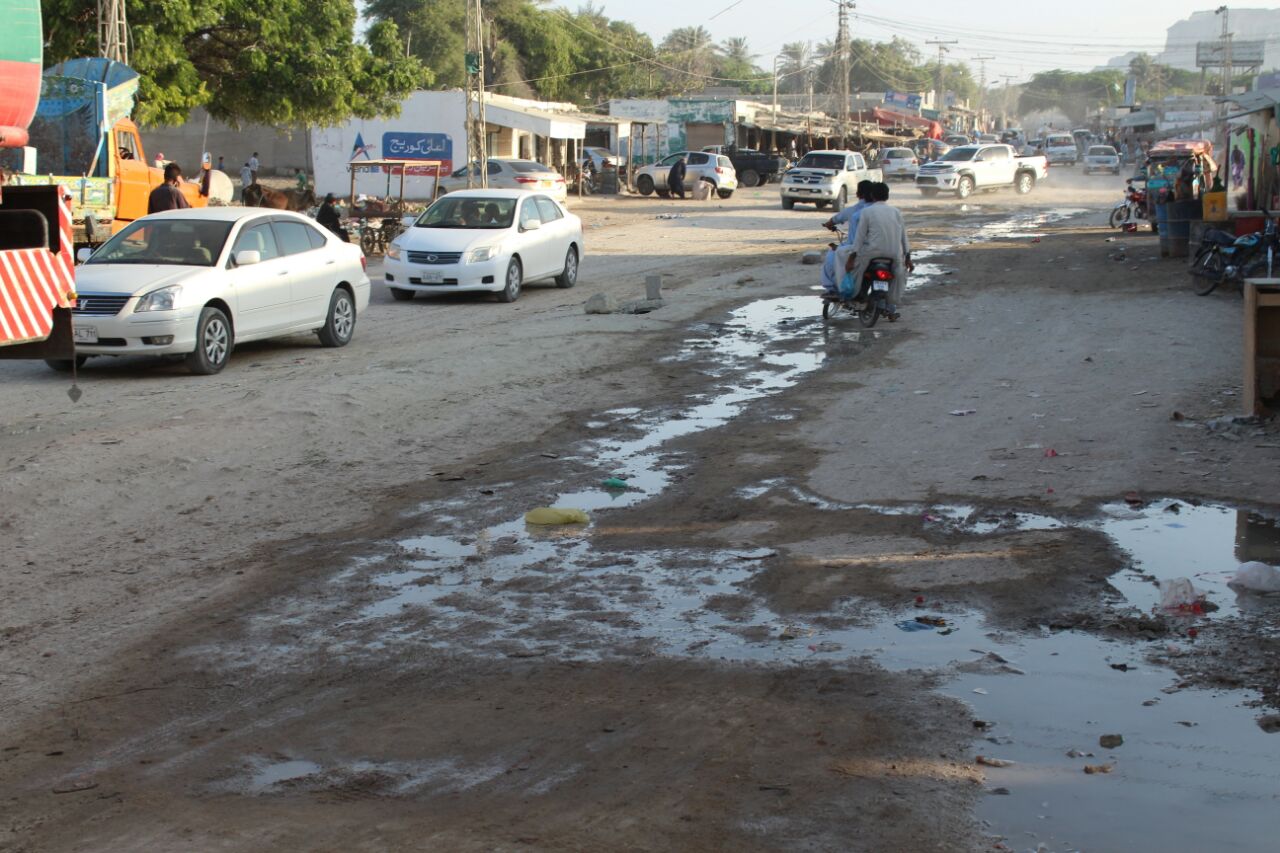 (Gwader): Gwadar, the center of China Pakistan Economic Corridor (CPEC), has gained worldwide attention. Every other day a new project is launched here and we read, hear, and watch a lot of stories about its development in national media.

On the other hand, the ground reality is sharply in contrast to all developmental talk promoted in media. Even the basic facilities are not available to the people here, let alone the talk of turning Gwadar into Singapore or Dubai.

A road at the heart of Gwadar’s main bazaar gives you a feel of travelling on a poorly maintained road in a backward rural area. Syed Hashmi Avenue, the road that bisects the main marketplace of Gwadar and extends from Javed Complex to Mulla Fazil Chowk is in complete shambles.

According to the residents of Gwadar, the claims made by Gwadar Development Authority (GDA) to construct a vast net of roads have become totally meaningless.

Abdul Kareem, a resident of Gwadar told Pak Voices, “Whenever I go to the main market for shopping, I never want to go again because of the poor road condition.”

Dr. Abdul Malik Baloch ex-chief minister of Balochistan laid the foundation stone of the construction of this road from Javed Complex to Mulla Fazil Chowk in 2015. The construction work started immediately on the road, which later slowed down and was ultimately abandoned altogether.

After the announcement of the construction, they destroyed the road that was already there. Ahmed Baloch, who owns a fish business along the road, told Pak Voices, “When the vehicles pass along the dirty road, they affect our business.”

One of the main hurdles in the construction of this road is the existing shops along the road. A lot of shops in the way of the road have to be demolished in order to make the road wider as per plan. But the shop owners have taken a stand against the demolition of their shops.

One of the shopkeepers told PakVoices without giving his name, “We would not let the shops be demolished until we are provided shops along the new road as compensation. Until and unless we are given a guarantee by GDA we won’t vacate our shops.”

He further said, “We won’t let hundreds of shops to be shifted away from the city. Rather we must be provided substitute shops along the same road.”

Pak Voices asked Nadir Baloch, the Superintendent Engineer (SE), GDA why the construction work on such an important road had come to a halt. He answered, “The biggest obstacle in the building of this road is the resistance of shopkeepers alongside this road. The property owners along the road would be happy if the construction work is resumed.”

According to Baloch GDA wants to construct a 2.5 KM long road. On a patch of one KM, the work is in progress and likely to be completed soon. However, the remaining portion would remain as it’s if the issue is not resolved between the shopkeepers and GDA.

He further claimed, “Most of the shops are illegal encroachments which can be demolished by GDA once the tender is passed and the road work got underway.

This article is produced by Balach Qadir and originally appeared on PakVoices.