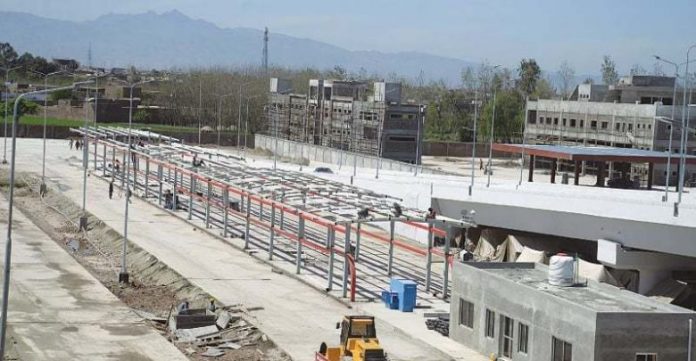 PESHAWAR: As many as 69 employees of Bus Rapid Transit (BRT) Project in Peshawar have been sacked even before the completion of the project due to financial crisis.

The sacked employees were serving as internees, supervisors and helpers. The Peshawar Development Authority (PDA) has issued notification regarding relieving the employees.

According to the notification, 69 employees of the project have been relieved before the completion of the project due to financial issues. It said the temporary employees were sacked due to increase in expenditure on the project.

The cost of the project has further escalated to Rs71 billion from the previous Rs68 billon. Officials said this increase is due to increase in the value of dollar.

The BRT project in Peshawar was launched during the previous tenure of the Pakistan Tehreek-e-Insaf (PTI) government in KP when Pervaiz Khattak was chief minister. Ambitious target of six months was set for completion of the project before the elections, but that did not happen. Now even 10 months after the elections and PTI again coming into power with even a bigger mandate, the project remains incomplete. Several deadlines had been given for completion of the project, but all the deadlines were missed and now the provincial government hopes to complete the project by year end. However, it hasn’t officially given any deadline this time.

The Peshawar High Court (PHC) recently while hearing a petition on BRT project had observed that seeking the date of completion of the project is like seeking stars in the sky.

The provincial government says all contractors have been paid the pending amount and they have been directed to complete the work as soon as possible. About 85 percent work has been completed on the main corridor and 65 percent on bus depots. The main corridor of BRT Peshawar and feeder routes are expected to complete by October 31. A lot of work remains in Hayatabad bus depot, which is likely to be completed by March next year. This means that the agony of the residents of Peshawar is not likely to end anytime soon and they will have to wait further for the completion of the project.