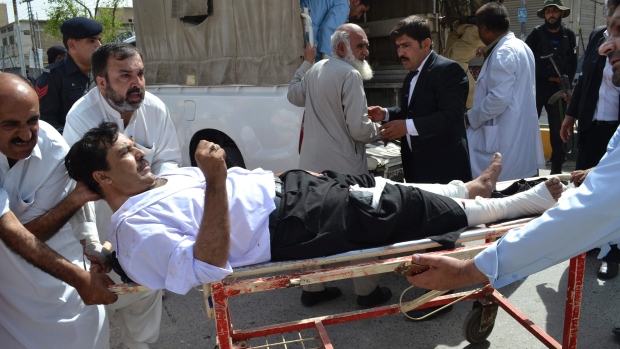 QUETTA, 08 August: At least 70 people including 25 lawyers and two journalists were killed in a blast that hit the emergency department of Civil Hospital Quetta on Monday morning, said local police.

The police said that lawyers and other people had gathered at the hospital to see the dead body of Baluchistan Bar Council’s president Bilal Anwar, who was earlier gunned down by unidentified gunmen, when the blast took place.

More than 100 people sustained injuries in the blast.

The dead bodies and the injured were rushed to different hospitals of Quetta where state of emergency has been declared.

The Bomb Disposal Squad has said that around 8kg explosives were used in the blast.

Meanwhile, Chief Minister Sanaullah Zehri has said that Indian secret agency RAW was involved in the deadly blast and said that he had enough proof to prove his claim.

Later on, the Prime Minister and Chief of Army Staff General Raheel Sharif paid visit to Quetta see the blast site and meet the injured in hospitals. They enquired about the health of those injured and issued directives for the provision of best medical facilities.