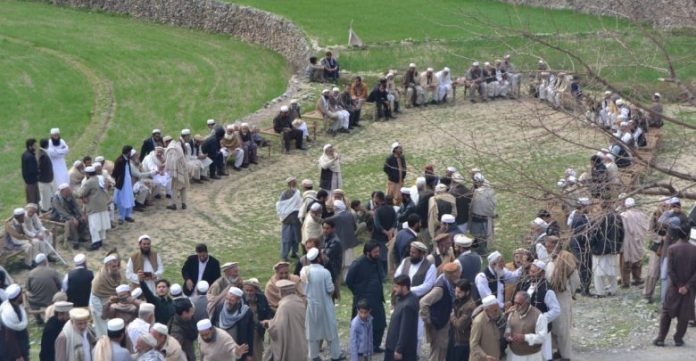 GHALLANAI: Due to numerous sacrifices by the security forces and local people, Rehmat Kor area in Mohmad tribal district situated near the Pak-Afghan border has been declared clear from all trouble and 76 displaced families of the area have been allowed to come back.

Local sources said that the Pakistan Army and Swat Scouts arranged a simple ceremony in Rehmat Kor area on Thursday where the members of 76 displaced families were offered warm welcome upon return to the area.

Brigadier Rauf Shahzad said on the occasion that the Pakistan Army offered great sacrifices for establishing peace in the area and now the fruits of peace are visible as the displaced families have finally returned with smiles on their faces. He assured that a process of large scale development will be kicked off in the area soon. He said some schemes of the area have been included in the Annual Development Program (ADP) which will be completed on priority basis.

“We are greatly satisfied after seeing smile on the faces of the returning people,” he said. MNA Sajid Khan Mohmand said that they were not allowed to enter Rehmat Kor during their recent election campaign due to law and order issues. However, he said, Rehmat Kor has now become an abode for peace due to the sacrifices of the security forces. He said Rehmat Kor is a lovely area and it has great tourism potential.

The local lawmaker vowed that he will work his heart out to provide basic facilities like school, health centres, roads and clean drinking water in the area. He said said now is the time to work for swift development of the area which was kept neglected in the past.
The Swat Scouts and area people had also arranged a lunch for the people coming to Rehmat Kor as a gesture of hospitality.

The people who came back to the area expressed great happiness and vowed to work together for ensuring durable peace in the area.