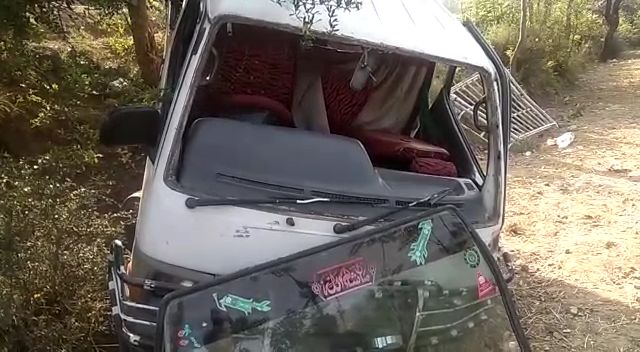 UPPER DIR: Eight people were injured when a passenger van fell into a deep ravine in Unkar area of Upper Dir on Tuesday, local sources said.

According to locals, a flying coach carrying passengers from Mardan to Kohistan on Tuesday morning went out of driver’s control in Upper Dir due to over speeding and fell into a deep ravine. Eight persons were injured in the incident who were shifted to District Headquarters Hospital Upper Dir by the local people on self-help basis. Hospital sources said the condition of two injured persons was critical, while the rest of injured are stable.

Traffic accidents routinely happen in Khyber Pakhtunkhwa mainly due to poor condition of roads and reckless driving by the untrained public transport drivers.

A nazim of a union council in Peshawar has accused his political rivals of torturing him on the issue of metalling of streets in their village.

The Pakistan Tehreek-e-Insaf (PTI) nazim of Union Council Samarbagh Malik Shahab said in his complaint to police that a street in the village was closed partially for construction work. He told Paharipur Police that construction work is being carried out on three streets near the main road in Samarbagh due to which the route has been closed at some points temporarily. He said the route was to be opened after completion of construction work.

The nazim said he along with contractor Daulat Khan was inspecting the ongoing construction work on the road when Zubair Khan, an activist of the Pakistan Muslim League-Nawaz (PML-N), came there along with Saleem, Fahim and three other persons came there and subjected him to torture. He alleged that the attackers were also carrying arms.

Paharipura Police has filed a case against the accused on charges of interference in official work, forcibly stopping construction work and torturing the nazim.

Members of the party against whom the case has been filed was not available for comments.