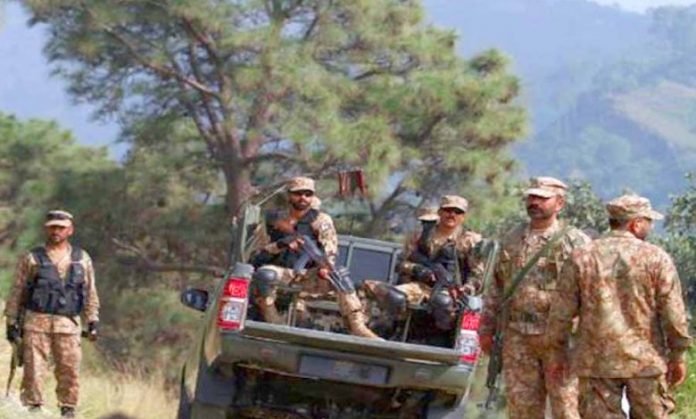 The military’s media wing said the security forces carried out two operations in Boya and Dosali areas of North Waziristan over the information of presence of terrorists. During the operations, eight terrorists, including a commander, were killed.

The ISPR said the slain terrorists were involved in remote control bomb blasts, firing, target killing, kidnapping for ransom and extortion. It said these terrorists were also involved in recruiting the local youth in militant organisations. A huge cache of arms and ammunition was also recovered during the operations.

On March 05, three persons, including two militants, were killed, while one security personnel sustained injuries in firing incidents in North Waziristan.

In a separate incident, unknown miscreants opened fire on a moving vehicle in Eidak village of Mir Ali tehsil due to which one person was killed.

On February 25, the security forces killed a ‘high-value’ target during an intelligence-based operation in Tiarza area of South Waziristan.

According to ISPR, the suspect was identified as TTP commander Nooristan alias Hasan Baba.

On February 23, the security forces killed a terrorist commander involved in killing of four female aid workers in North Waziristan.

According to ISPR, the security forces conducted an IBO in Mir Ali upon confirmation of presence of terrorists. During exchange of fire, terrorist commander Hassan alias Sajna of TTP Hafiz Gul Bahadur group was killed. The military’s media wing said the terrorist commander was involved in killing of four female aid workers in Mir Ali on February 22.

On February 22, four women aid workers were killed, while their driver was injured in a firing incident in Mir Ali.