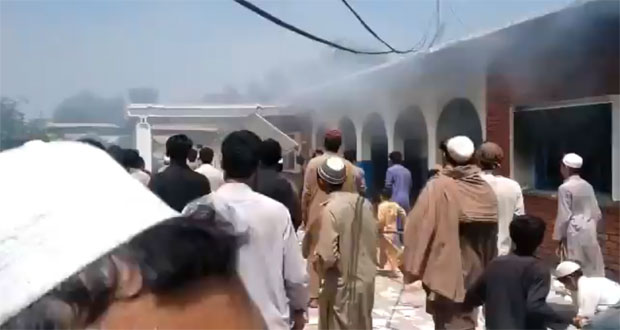 PESHAWAR: Peshawar Police has arrested nine people involved in setting fire to a hospital in Mashukhel area after staging a drama of reaction by the polio vaccine on the children.

Superintendent of Police (SP) Peshawar Sahibzada Sajjad said nine people have been arrested for vandalism in the health centre. He said the brother of the school principal is also included in the arrested people. He said the suspects have been arrested with the help of video evidence and two Kalashnikovs and two pistols have also been recovered from their possession.

Sahibzada Sajjad said the total number of arrested people is now 10 as one person was arrested a day ago for making a fake video showing that the children are unconscious after consuming polio drops, while in reality, they were not unconscious and looked healthy. He said five of the arrested people were nominated in the first information report (FIR) of the incident. He said cases have been filed against 12 people for trying to sabotage the vaccination campaign.

Angry mob had attacked the basic health unit in Mashukhel area of Peshawar after more than a hundred children started vomiting after consuming polio drops and they were taken to hospitals for treatment. However, the government insisted that there was nothing wrong with the vaccine and all the children were safe and there was no threat to their health.

According to initial report of the district administration, 767 children of Darul Qalam Model School Mashukhel, Hallmark School Hassan Garhi and Qadeem Primary School Mira Kachori were brought to different hospitals after rumours spread about reaction of the polio drops. However, the condition of all the children brought to hospitals was found stable and all of them were sent home.

The polio vaccination campaign was badly affected after the rumours and many people refused to administer polio drops to their children.

The private schools in Peshawar also refused to allow the vaccination teams to give polio drops to children on Tuesday and asked them to go to their homes for vaccination as they cannot sustain pressure from the parents.

Media reports said the rumours in KP have also affected the vaccination campaign in other parts of the country as some people have refused to give polio drops to their children fearing that it might cause reaction.