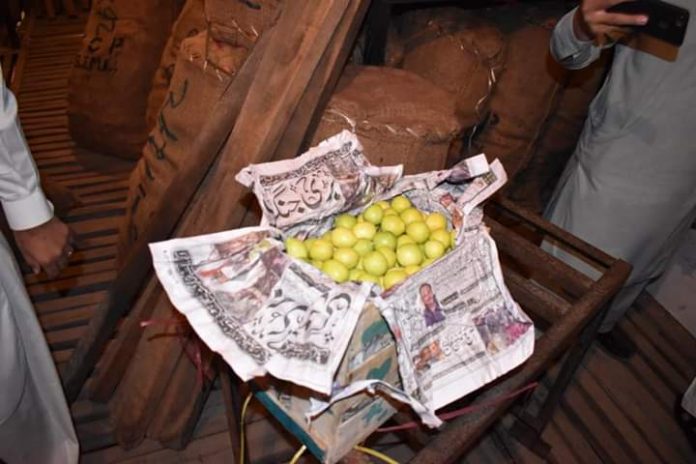 PESHAWAR: The district administration of Peshawar on Wednesday confiscated a huge quantity of lemons which were hoarded in a godown for sale on high prices.

According to a statement issued from the office of Deputy Commissioner Muhammad Ali Asghar, the administration received information that a huge quantity of lemons was horded at a cold storage in Chamkani which are being sold in the market at very high rates. A special team supervised by Additional Assistant Commissioner Abdul Wali conducted a raid at a godown in Chamkani and recovered 9,000 kilograms lemon.

A fine of Rs100,000 was imposed on the owner of the cold storage. The confiscated lemon was sold out in the market in the presence of the district administration officials.

With the advent of Ramazan, the price of lemon sky-rocketed and it was available in the market at up to Rs500 per kilogram. This unprecedented increase in lemon price bewildered the citizens and they were suspicious that something must be wrong in this regard. Lemon is an important ingredient used in beverages during the holy month of Ramazan, particularly in summers. Keeping in view the high demand of lemon in Ramazan, the hoarders started storing it to earn more profit. The citizens suffered a lot due to this practice and the commodity which was generally available for around Rs200 per kg in the market was available for Rs500 to Rs600 per kg during Ramazan.

This unbelievable hike in lemon prices kept many buyers away and the issue was also trolled on the social media. Now with Wednesday’s raid in Peshawar, the citizens are hoping that the prices of lemon will come down in the market.