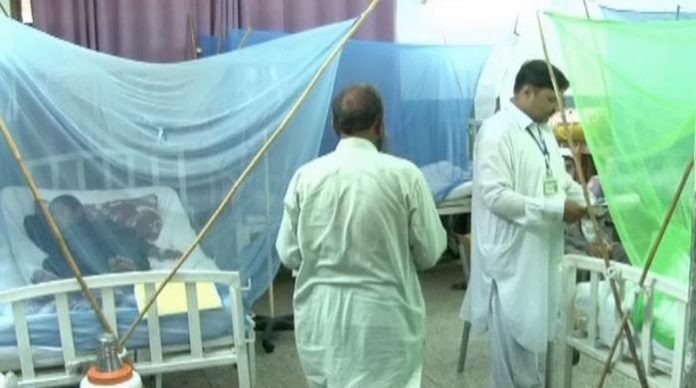 PESHAWAR: So many dengue cases are being reported from different districts of Khyber Pakhtunkhwa and the situation seems to be going out of hands of the provincial government.

According to the KP Health Department, 98 fresh dengue cases have been reported from different parts of KP during the last 24 hours, including 55 cases from Peshawar.

Besides Peshawar, nine each cases have been reported from Swat, Shangla and Battagram, six from Mansehra, five from Swabi, and four each from Mardan, Lower Dir and Buner. The total number of people affected from dengue in the province this year has reached 1,189.

It seems that the KP government is in denial mode over the serious issue has Chief Minister Mehmood Khan during a recent meeting with the health department officials had ordered action against those spreading ‘rumours’ about the spread of dengue in KP. However, as the situation stands now, the number of dengue patients has reached 1,189 which means that the situation is actually alarming and the KP government needs to take emergency steps to control the situation.

During the September 12 meeting, the chief minister was briefed about the situation of dengue in KP. He was informed that most cases are surfacing from Peshawar. He was told that NS-1 positive patients are falsely diagnosed with dengue fever by private laboratories. He was told that private laboratories are responsible for creating panic amongst the masses for monetary gains. The health officials told the chief minister that special cells have been set up in government hospitals for the diagnosis of dengue virus in patients.

After getting the briefing on Thursday, the chief minister directed all relevant departments to play their role for controlling the spread of the dengue virus in the province. In this regard, he directed to immediately hire entomologists to exterminate the virus permanently.

In several districts of KP, there are no separate wards for treatment of dengue patients in the main hospitals, due to which the patients had to come to Peshawar for treatment. Social circles have called upon the government to take notice of the situation and take measures to prevent spread of the disease.