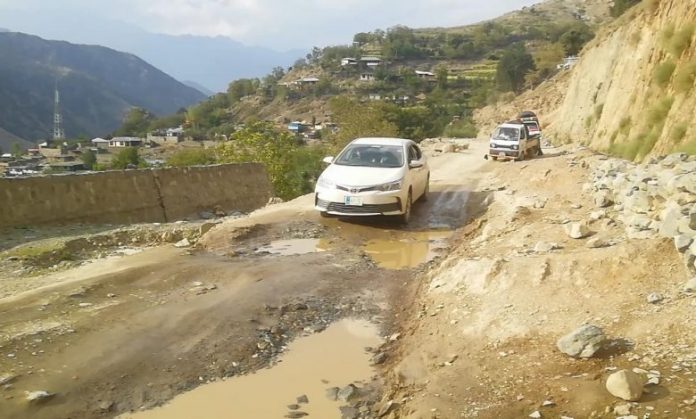 CHITRAL: Mujeebur Rehman has spent the better part of past 13 years on wheels, carrying passengers from Chitral to Peshawar, Islamabad and other areas.

Mujeeb knows all the bends and potholes of the road. Mujeeb said work on Chitral road starts every month and stops after a month or so and then there is nothing for the whole year.

He said that tourists once experience the district’s roads, usually did not to bother to visit the area again. “Locals and tourists both have grown tired of never ending construction,” he said.

Though bad roads are nothing new for the remote and mountainous area like Chitral; however, locals were hopeful that the situation would improve for the province’s largest district after its bifurcation in two districts.

But that has not happened.

The situation is so bad that even the main road leading to district headquarters Chitral is not fully metalled. A couple of kilometers long stretch of road from Loweri Tunnel till Mirkhwnai check-post offers extremely bumpy ride.

The construction of this stretch of road had started years ago but almost entire length of this portion is in really terrible shape. Traversing this section takes considerable amount of time.

What tourists have to say about Chitral Road

Quratul Ain from Lahore visited Chitral to attend Zini Pass Paragliding Competition earlier last month. She told TNN that it was her second visit to the district over past few years. Quratul Ain said that Chitral has not changed much since her first visit.

“Chitral is really picturesque and good tourist destination,” she said.

She said though it takes hours to reach Chitral yet its natural bounties are sure shot remedy for this tiring journey.

However, Quratul Ain was of the view that poor roads of district were an injustice to both the locals as well tourists.  She said that the roads were so bad that hardly someone will think of coming back after seeing the roads conditions.

Local said that though Chitral produces really good fruits but could not be marketed out of district due to remoteness and district bad roads.

Most of the produce is wasted.

A local said that winter was season of pear, grape and apple season. He said that apples were rotting due to difficulty of getting them out of districts. “They could have earned good by taking these fruits to major cities,” he said.

Sirajuddin, a local journalist told TNN that though Chitral attracts many tourists across the country; however, due to bad roads’ conditions force many to think twice before making a visit.

He said that though the provincial government was making tall claims of promoting tourism in the province, in reality its focus has been entirely on Swat district, which was home district of the chief minister KP.

Mr Siraj said that work on the Loweri Tunnel link road was going for past decade with no end in sight.

A couple of weeks back, a focal person for the National Highway Authority during a hearing regarding Swat and Dera Ismail Khan’s Motorway, assured the Peshawar High Court that seven kilometers stretch of the Loweri Tunnel would be completed within a month time.

Chief Justice PHC Qaiser Rasheed Khan in his remarks said that it appeared as if provincial government has left the people of the Chitral at divine mercy.

The court directed the NHA to complete the road construction within a month time and share its report with the court.