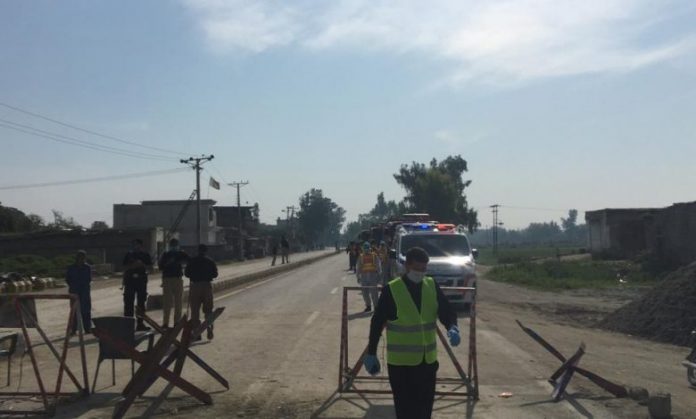 MARDAN: Hardly anyone outside Mardan knew about Manga until the first coronavirus death from Pakistan was reported from the area four months ago.

When the first death from Pakistan was reported from Manga on March 18, the whole country came to know about this area and even it became known outside Pakistan. Manga, having a population of 56,000, was the first union council in the country where complete lockdown was announced by the government.

Few hours after the death of 50-year-old Saadat Khan from coronavirus, a 36-year-old man from Sufaid Dheri area of Peshawar also died of the virus. Both of them had returned from abroad. Saadat Khan had returned from Saudi Arabia after performing Umrah, while the person from Sufaid Dheri had come from the UAE. The 49 villages of Union Council Manga remained under lockdown for the whole month, while in Sufaid Dheri, only the street in which the victim had spent time was quarantined.

Saadat Khan had gone for Umrah in mid-February and he was among the last foreign pilgrims who had performed Umrah before the closure of the Grand Mosque for pilgrims after the outbreak of coronavirus. After return of Saadat Khan to Pakistan on March 08, the country’s situation had changed abruptly. There was no corona case in Pakistan when Saadat Khan was leaving for Umrah, but there were dozens of cases when he was returning and the government agencies were chasing the suspected cases.

As per Pakhtun traditions, the pilgrims received warm welcome from the relatives and other people of their village. The family members of Saadat Khan had arranged a reception for the area people in which about 2,000 people participated. As per local culture and traditions, almost all the guests hugged Saadat Khan and had handshakes with him to congratulate him for pilgrimage. The district administration said this was the main reason behind locking down the entire area.

Saadat Khan was a health technician and he was also running a small clinic near his house. Many people used to visit his shop daily for buying medicines and having medical treatment. 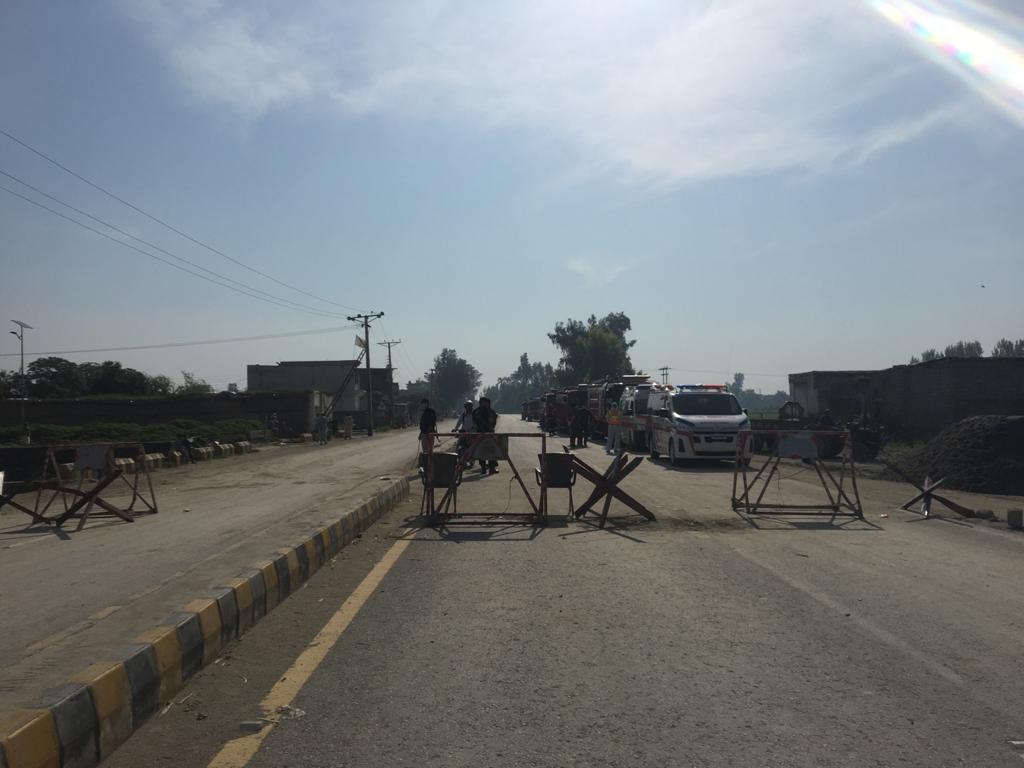 Saadat Khan went to District Headquarters Hospital after having fever, flue and difficulty in breathing. Doctors sent his samples to the National Institute for Health (NIH), Islamabad, and advised him to admit in isolation ward, but he refused and went home and did not isolate himself according to doctor’s advice. His test result came back as positive the next day after which a team of the hospital shifted him to hospital under the standard operating procedures (SOPs) and admitted him to isolation ward, where he died after few hours.

Saadat Khan was laid to rest in the darkness of the night and only few relatives were allowed to attend the funeral. The Qul of the deceased was also not allowed by the administration.

Complete lockdown, a test for administration

Additional Deputy Commissioner Mushtaq Khan said that complete lockdown in 49 villages of Manga was a big challenge for the district administration.

Mushtaq Ahmed told TNN that the biggest problem for the administration was to supply food to people. Manga is situated near the boundary of Charsadda and many people go to markets of Charsadda to fulfil their food needs. However, they were locked inside their homes after the lockdown. Most of people in the area are poor and they soon ran out of money to buy food items. Many people depend on livestock in the area and there was no arrangement for fodder for the cattle.

The area residents had also staged a protest against the lockdown during initial days. Mudasir Shah, a local resident, told TNN that the performance of the district administration during the whole time remained disappointing. He said tall claims and promises were made, but nothing was given to people.

“There was no ration or protection equipment for the locals. Besides fears and misconceptions, the sentiments of the people were also growing against the government. No proper efforts were made to create awareness among the people. There was no proper system of screening even after the lockdown,” Mudasir said.

The additional deputy commissioner said the food chain of Manga was restored by the district administration with the help of local trade union. He said ration vehicles used to come to the area on daily basis and people were given food according to their needs.

Mushtaq said the administration had set up a committee comprising 24 volunteers for ration distribution in the area.

“The committee members efficiently distributed ration and also created awareness among the people about the disease. These tasks would not have been accomplished without the help of the committee,” he told TNN.

Mudasir Shah was also a member of the committee. He said the most challenging task for the committee was ensuring implementation of SOPs in mosques. He said some shopkeepers were not closing shops on their request after which the help of the administration and police was sought.

“The administration’s ambulance was used whenever any person fell ill. But doctors used to be reluctant from check up when they came to know that the patient has been brought from Manga,” he said.

The district administration deployed a team of doctors at the rural health centre (RHC) after lockdown in Manga. 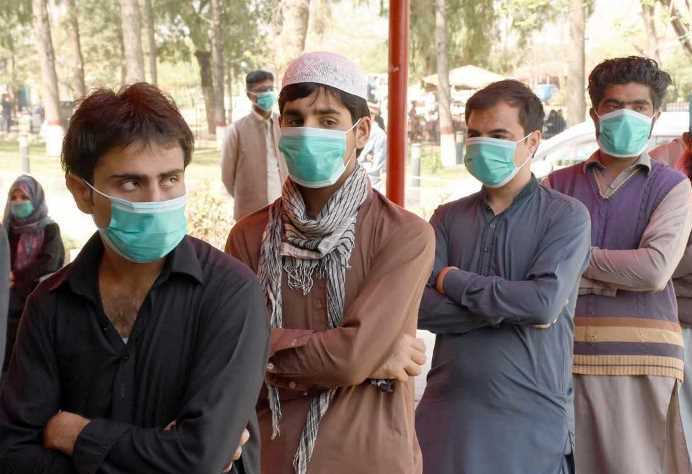 Mushtaq said most of those who tested positive for coronavirus were those who were in regular contact with Saadat Khan. The infected persons included Saadat Khan’s widow, son, daughters and three daughters-in-law. They were subsequently shifted to quarantine centre at the hostel of Abdul Wali Khan University Mardan.

No patients at OPD

Partial lockdown started in Pakistan from March 23 after which all the shops, hotels and markets with exception of shops of essential items were closed and public transport was also banned. After one week, the out-patient departments (OPDs) of all public sector hospitals were also closed.

However, despite the grave danger of coronavirus spread, screening and OPD service was available in RHC Manga.

Dr Shams, who was serving at RHC Manga, told TNN that the death of Saadat Khan had created fear and panic in the entire area and the threat was also real. However, he said, the 60-member staff of Manga RHC continued duties with full dedication. He said protective equipment was not available for staff initially, but it was provided later on by the administration.

Dr Shams said about 200 patients used to come to the hospital daily before the outbreak of coronavirus. However, he said, not even a single patient was coming to the OPD after the lockdown. “Even those who were actually ill did not come to hospital over fears that they would be quarantined,” he said.

Dr Shams said the trust of people hasn’t been restored fully despite passage of many months and now only 60-70 patients are coming to OPD.

During different interviews, TNN also talked to a local youth who received certificate from Unicef for creating awareness among the people about coronavirus.

The youth told TNN that he used to make people fearful about coronavirus despite the fact that he doesn’t believe in the existence of the virus. He said he visited 25 hujras (male guest houses) and 36 mosques during the awareness campaign.

When asked why he volunteered for the awareness campaign when he doesn’t believe in coronavirus existence, he replied that he wanted the people to act on the SOPs so that the lockdown ends and people get rid of the difficult situation.

The youth was of the view that no person meeting Saadat Khan would have been safe if the virus really had the capability of spreading so fast and so easily. “Thousands of people met Saadat Khan, but only 40 of them tested positive. This doesn’t make sense for me,” he argued.

The first coronavirus case of Pakistan was reported in Karachi on February 26, while first death was reported on March 18 in Manga, Mardan. Death toll in the country has crossed 5,360, while infections have crossed 255,000. In KP, the virus has infected over 31,000 people so far, including 1,159 cases in Mardan. Out of over 1,100 deaths in KP, Mardan has reported 55.

Health experts believe that the low number of deaths and infections in Mardan are due to successful lockdown in Manga. However, critics say only 5,130 tests have been conducted in Mardan so far which is the reason behind low cases.

Why smart-lockdown is easier in Mardan?

The Pakistan government has now introduced the strategy of smart-lockdown in areas considered to be hotspots for the spread of coronavirus. 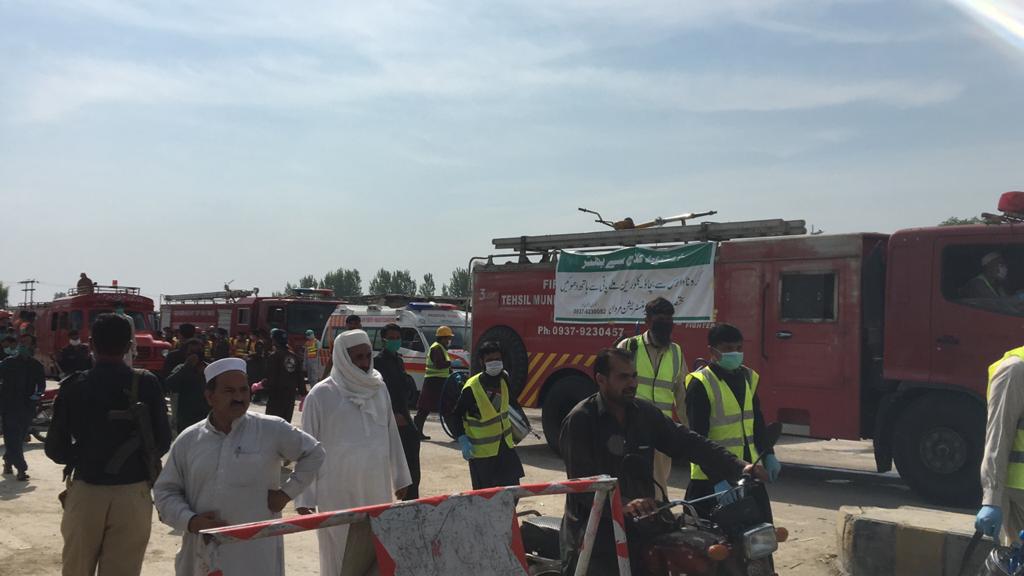 ADC Mushtaq said there was a complete lockdown in Manga during which 6,500 houses were quarantined, while smart-lockdown is a small-level arrangement during which few hundred people are confined to their area. He said the district administration has now gained enough experience of lockdown after Manga restrictions when ration was arranged for 56,000 people of the area for one month.

“Now smart-lockdown for the district administration in selected areas is quite an easier job,” he said.