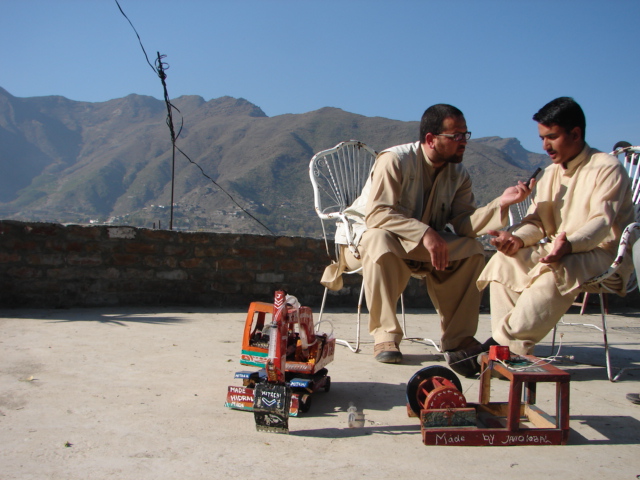 MINGORA, December 4: Whether you call him a studious student, a thinker or an engineer, several adjectives are insufficient to describe Mr Javed Iqbal, who has invented a power generator recently.

He has invented a power generator that functions with the help of water and air and can generate electricity up to 12 volts.

Mr Iqbal had long been thinking to invent a device that could generate electricity because the country has been facing worst energy crises.

Earlier, he had also made a functional model of a water-run excavator out of discarded syringes and wood planks. His excavator can lift weight up to 2 kilograms.

“The idea came to my mind when excavators were brought to our region following the 2010 floods. The invention of this excavator took two months,” he says.

After floods, the people of Mr Iqbal’s village were facing various problems, and they could not even charge their mobile phones because electricity was not available.

He said he first observed electricity generators being used in the area and then started making his own.

“The generator that I have invented can charge four mobile phones,” he said, adding that he wanted to invent more and even better generators but that he needed the assistance of the government authorities.

“First of all, I appeal to the government to help me in my education and income generation for my family,” he added.

Mr Iqbal, son of a farmer, said he was determined to inventing more unique machines in the days to come, but that he was financially too weak to afford the expenses needed for such activities.

Mr Aftab, one of Mr Iqbal’s class fellows, says that his friend is very intuitive. “He keenly observes everything. He could have even invented a bigger machine, had the government authorities supported him,” Mr Aftab added.

Another fellow of Mr Iqbal, Mr Sanjar, says he was impressed with mental abilities of his friend. “Javed Iqbal is a studious fellow and he doesn’t waste time. He is often busy in studies or other positive activities,” he added.

Mr Iqbal says he is nowadays working on a water pump. “I am making a hand pump that will pull water from under the ground. The hand pumps that we already have are made of iron. I am making a water pump from wood for the first time. My product will cost little money compared to the iron-made pumps and it will work better,” he added.

About his studies, he said one of his friends was supporting him in meeting his educational expenses. He appealed to authorities for financial assistance to meet his educational and household expenditures.