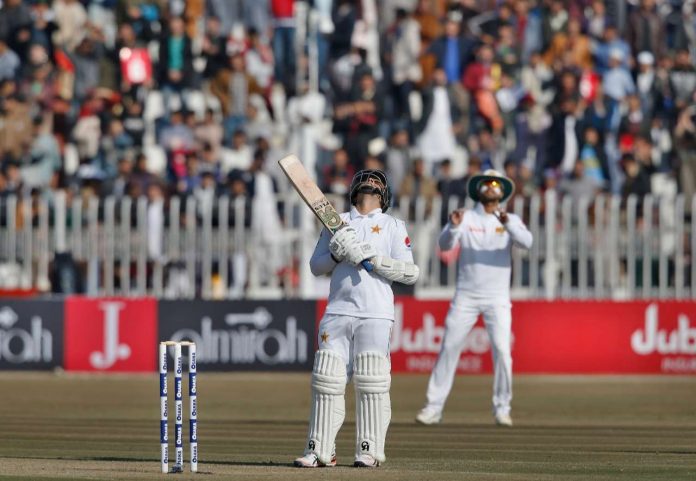 PESHAWAR: As expected, the first match of the two-match Test series between Pakistan and Sri Lanka at Rawalpindi Cricket Stadium ended in a draw.

The match remained mainly affected due to persistent rain in Rawalpindi and only two days play happened in the five-day Test. Cricket lovers were greatly excited over return of Test cricket to Pakistan after 10 years. However, rain played spoilsport.

On the last day of the Test on Sunday, Sri Lanka declared their first innings on 308 for the loss of six wickets. DM de Silva was the pick of batsmen for Sri Lanka who scored 102 runs, captain Karunaratne scored 59, Fernado scored 40 and Dickwala scored 33.

Pakistan took some positives from the drawn match – the main positive came in shape of century by talented opener Abid Ali on his debut. He got chance to play in Pindi after warming the bench for so long and fully utilised the opportunity to show his mettle. He remained unbeaten on 109 and became the first batsman to score centuries on ODI and Test debut. In-form Babar Azam also never lagged behind and scored a wonderful century and that too with a good pace. He also remained unbeaten on 122 runs, captain Azhar Ali scored 36 runs, while Shan Masood was out without scoring. Pakistan were one 252 for the loss of two wickets when the play ended due to bad light and the Test ended in draw.

Earlier, the selection of all-pace attack by Pakistan in a home Test generated a lot of debate. The pace bowlers were good in patches but they could not restrict Sri Lankan batsmen fully. Youngsters Naseem Shah and Shaheen Shah Afridi looked good as they took two wickets each, while debutant Usman Shinwari and Mohammad Abbas took one wicket each. Pakistan also used part-time spinners Haris Sohail, Shan Masood and Asad Shafiq, but they remained ineffective. The absence of Yasir Shah from the playing eleven drew criticism from cricket experts.

Abid Ali was declared player of the match for his brilliant batting on debut. Pakistan and Sri Lanka shared 20 points each after the match ended in draw.

The second match of the series will be played in Karachi from December 19-23.