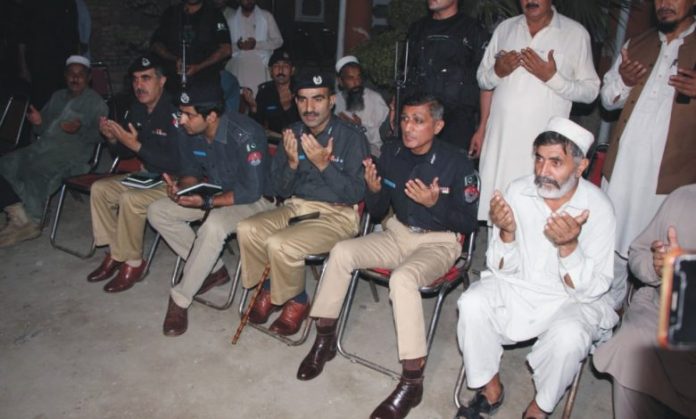 CHARSADDA: The murderer of two and a half years old Zenab in Charsadda could not be arrested two days after the heinous act, while the entire area is soaked in gloom.

Khyber Pakhtunkhwa Inspector General Police Sanaullah Abbasi and Deputy Inspector General (DIG) Mardan Sher Akbar Khan visited Charsadda on Thursday and met the family members of Zenab to offer condolences. The IGP said it is a blind murder case, however no stone will be left unturned to trace the culprits. He said the culprits will be arrested soon.

Zenab went missing two days ago and her body was found on Thursday. Police said the body of the little girl was dumped into fields. The report of the medical board has confirmed that the minor girl was subjected to sexual abuse. The report also said that the body of the minor girl bears torture marks. The minor was reportedly killed with a sharp-edged weapon after sexual abuse.

Police have encircled the whole village and also arrested 12 suspects, but the killer has not been identified yet.

The whole area is soaked in grief over the gory incident and a large number of people are visiting the village to offer condolences with the victim family. The parents are so frightened that they are not allowing their children to step outside their homes.

People of the area have demanded the law enforcers to ensure immediate arrest of the culprits and award exemplary punishment to them.

Meanwhile, the Child Rights Movement (CRM) KP and Awaz District Forum Charsadda have condemned the murder of the minor girl in Charsadda after sexual abuse and demanded justice for the victim family.

The civil society organisations said alarming increase in the incidents of sexual abuse and murder of children are being witnessed in Pakistan which is a cause of grave concern.

CRM Coordinator Sana Ahmed said such incidents are happening regularly and the citizens have the right to know when such gory incidents will come to an end. She said implementation of laws on such crimes must be so strict that the culprits must be frightened by even a thought of committing such crimes.