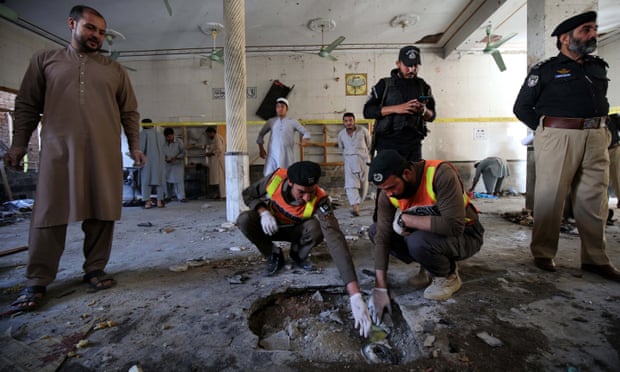 PESHAWAR: Academic activities have been suspended at Madrassa Jamia Zubairia in Peshawar where a blast happened on Tuesday in which at least eight people, including two teachers, lost their lives and over a hundred others were injured.

The administration of the religious seminary has sent all the students home and asked them that they will be informed about the status of academic activities latter.

The blast happened in the madrassa when Dars-e-Hadith was continuing there and it was also reportedly seen live by followers on social media. A man entered the madrassa with a bag, kept it in the crowded hall and then went outside on pretext of bringing his shoes, and then the blast happened. About 600 students are enrolled in the madrassa and some students from Afghanistan are also studying in the seminary. Law enforcing agencies said seven kilograms explosives and ball bearings were used in the blast.

Khyber Pakhtunkhwa Health Minister Taimur Saleem Jhagra confirmed in a Twitter message that seven people were pronounced dead at LRH on arrival. He said 70 more people were brought to the hospital in injured condition.

Sources said the condition of 10 injured students was critical and it is feared that the death toll might increase.

Khyber Pakhtunkhwa Chief Minister Mahmood Khan has announced Rs500,000 compensation for the families of those who lost their lives in the tragic incident, and Rs200,000 each for injured persons.

A hospital official said the deceased were aged between 20 and 40 and most of the victims received ball bearings and were burnt.

Prime Minister Imran Khan in a message condemned the blast in Peshawar and prayed for early recovery of the injured persons.