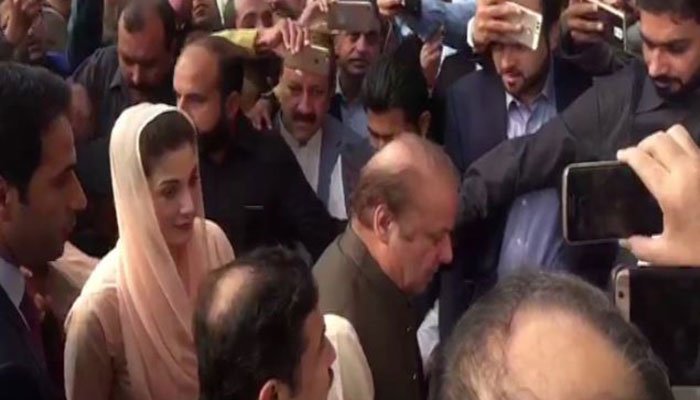 The court refused to grant exemption to Nawaz Sharif from personal appearance and the former prime minister had to submit two security bonds. During the hearing, Nawaz Sharif’s lawyer Khawaja Haris said they need time to prepare the case.

Strict security measures were taken outside the Punjab House and the Accountability Court. Besides federal ministers, a large number of PML-N supporters came to the judicial complex to support their leaders. The supporters encircled the vehicle of Nawaz Sharif on his arrival at the judicial complex and showered rose petals on him.

Nawaz Sharif said during the break in the court that he was being punished for ending power load-shedding, improving law and order and initiating China Pakistan Economic Corridor (CPEC). He said the Pakistan People’s Party (PPP) co-chairman Asif Ali Zardari was talking against him “to please someone”.

The Islamabad High Court (IHC) had directed the Accountability Court on Thursday to re-hear Nawaz Sharif’s plea seeking to club three references against him.