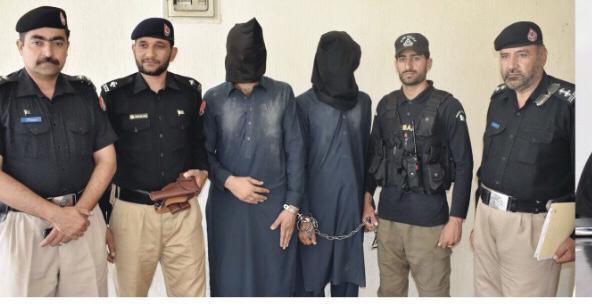 MARDAN: Mardan police has arrested two accused allegedly involved in opening fire on two transgender persons in which they were injured.

District Police Officer (DPO) Sajjad Khan said at a press conference along with other senior police officers on Thursday that two accused, Rasheed and Hamza opened fire on two transgender persons in Jhanday Bazaar in Mardan on Monday night. He said the two transgender persons, Arman alias Collegi and Farman alias Spogmai, were injured in the firing. He said Arman and Rasheed had exchanged hot words few days ago which was the reason behind the incident.

The DPO said he entrusted the task of arresting the culprits to Superintendent of Police (Operations) Mushtaq Khan who formed a team led by Station House Officer (SHO) Takht Bhai Police Station Manzoor Khan which conducted investigation of the case on scientific lines. He said the two accused have been arrested and pistol used in the incident has also been recovered. He said the accused have confessed to their crime during initial interrogation.

To a question, Sajjad Khan said the condition of both the injured persons is out of danger and both are provided proper medical treatment at the hospital. He said he went to the hospital to inquire after the health of the injured transgender persons and he was satisfied with the health facilities there.

The DPO said protection of lives and properties of every citizen without any discrimination is the main duty of police and no compromise will be made in discharge of these duties. He also announced cash prizes and commendation certificates for the policemen who arrested the accused.

Few days ago, on Eid day, Mardan Police arrested three persons accused of cutting the hair of a transgender person after briefly kidnapping and torturing him.

Police said it came to know about the incident which happened in Mall Mandi Chamiaran area on Eid day. The transgender person, Shakeel alias Shakeela, was kidnapped briefly and he was tortured and his hair were cut by the kidnappers. The district police chief took notice of the matter and formed a team for arresting the accused. The police team arrested three accused, Shahzeb, Mansoor and Fakhar-e-Alam.