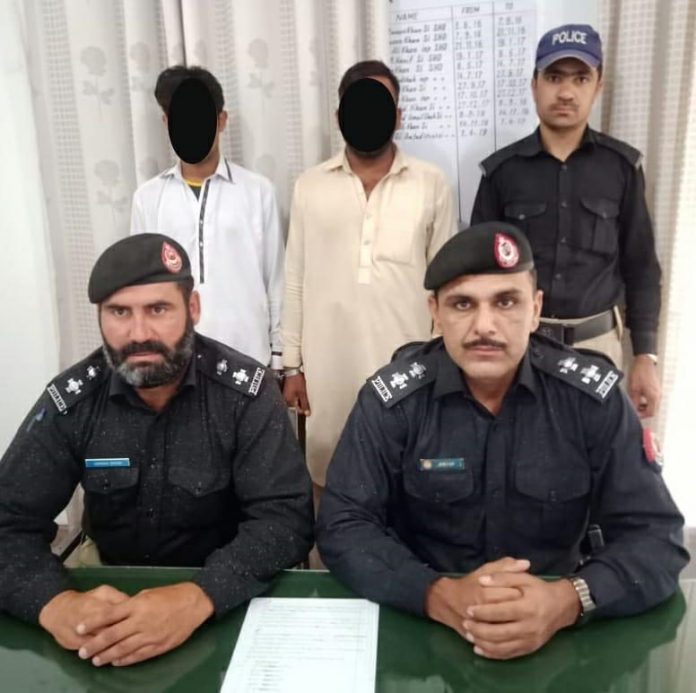 NOWSHERA: Police have arrested two accused allegedly for sexually abusing a 14-year-old boy in Mian Esa village within the limits of Misri Banda police station on Saturday. They are accused of sexually molesting the boy and making his obscene photographs and videos.

A 14-year-old boy, a resident of Mian Essa locality, has registered an FIR with the police saying that he was molested by two individuals identified as Yaseen and Malang. The boy added that during the molestation, they also made his video and photographs and warned that photos will be uploaded on social media if he told anyone about their crime.

The boy told the Misri Banda police that he was sent to a shop to bring cold drinks from a nearby shop, but when he returned, he was overpowered by two men. After registering the case, the district police officer Captain retried Wahid Mehmood has taken notice and directed SHO Inayat Ali Shah and Deputy Superintendent of Police (DSP), Ihsan Shah,  for immediate action against the culprits.

The SHO of Misri Banda police station Inayat Ali Amjid, during a press conference, told media that he had constituted special teams to arrest the accused. He added that the teams have conducted raids for the arrest of the culprits. The police official added that during the initial investigation, both the culprits accepted their crimes, however, police is conducted further investigation into the case.

Yesterday (Friday), an accused involved in the molestation of a 10-year-old boy was arrested from Chamkani area and a man was arrested in accusation of sexual abuse of two minors in Dera Ismail Khan.

Child sexual abuse cases are being reported from various parts of the country on almost daily bases. According to unofficial statistics, in Pakistan, during the last five years, 18000 children were sexually abused and killed. However, says the study, so far only 25 culprits were granted death sentence while 11 were imprisoned for life.

Child rights activists have been demanding to implement laws on child sexual abuse. The activists believe that though police arrest the culprits however, they get released from the courts due to lack of proper evidence.