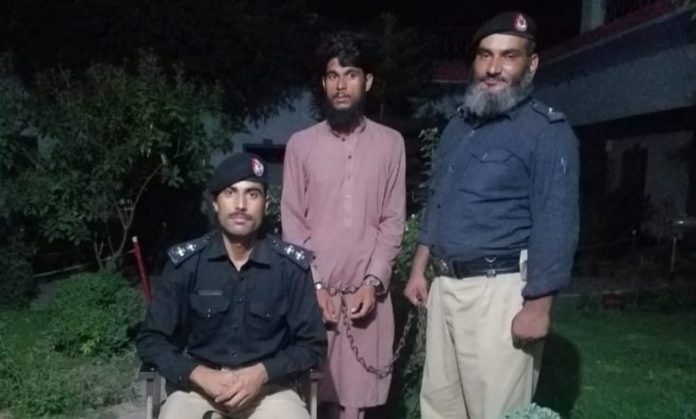 CHARSADDA: Charsadda Police has arrested an accused involved in hurling death threats on the social media to people from a particular school of thought through a video.

District Police Officer (DPO) Muhammad Shoaib Khan took notice of a provocative video which went viral on the social media after which a team of Nisata Police Station took action and arrested the accused. The accused uploaded a video in which he was threatening to kill people from another school of thought. The accused had also claimed of setting up his own organisation. A case has been filed against the accused and further investigation is underway.

Imran claimed in the video that he has formed an organisation and the clerics have allowed them to kill the people from the other school of thought.

The DPO took immediate action over the provocative video which could potentially fan the sectarian fire and cause unrest. He directed Deputy Superintendent of Police Sardheri Muhammad Riaz Khan to arrest the accused. Station House Officer (SHO) Nisata Behramand Khan spread a network of informers that informed him that the accused is present in his area.

The SHO along with his team raided his residence and arrested him and also recovered a Kalashnikov from his possession. He was shifted to Nisata Police Station for interrogation. A case was filed against him and further investigation is in process.

Two more people were also seen in the viral video. Police are conducting investigation to identify the two supporters of the main accused and then arrest them by conducting raids. Police said the two accused will be arrested soon after getting information about their whereabouts from the arrested main accused.

The DPO said no one will be allowed to spread sectarian hatred in the district.