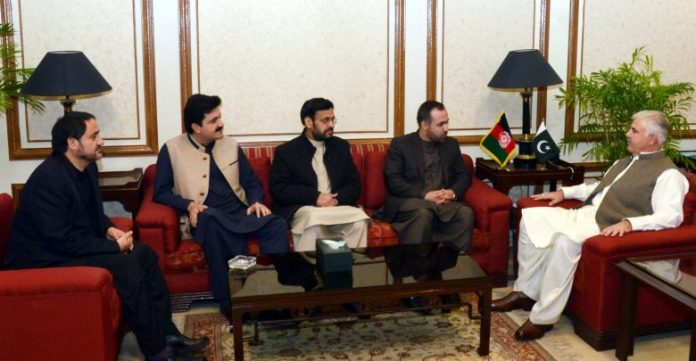 PESHAWAR: Renewed efforts for finding a path towards lasting peace and enhancing the bilateral trade were the main topics of discussion between Chief Minister Mahmood Khan and Afghan ambassador Shukrullah Atif Mashal on Tuesday.

The Chief Minister said that all the issues of contention between Pakistan and Afghanistan should be resolved through dialogues. He also stressed the need for enhancing trade across the border and efforts for peacebuilding in the region.

During the meeting, it was decided to curb the Hundi business and promote the banking system in both the countries. Besides that both, the leaders agreed to start ambulance services to help the patients get easy accesses to hospitals. They have also agreed to start the shuttle transport services on Torkham border.

The CM has expressed the agreement to increase the Visa counters at immigration services to facilitate all those applying for the visa. The Afghan ambassador and Chief Minister also said the efforts will be made for building the mutual trust that is more important for solving all the bilateral issues.

During the meeting, they decided on the student’s exchange program and enhancing the bilateral trade volume between the two countries. The Chief Minister informed that Afghan ambassador that he has himself visited the Torkham border and know better about the issue which has also been brought in the notice of Prime Minister, Imran Khan.

The Ambassador has also conveyed a special message of the Afghanistan President Ashraf Ghani.

Shukrullah Atif Mashal, who was the chairman of Afghanistan Cricket Board, was appointed a new ambassador to Pakistan. Mashal replaced Omar Zakhilwal after his resignation. The new ambassador has taken the charge of his office in Islamabad. Atif Mashal had recently resigned as chairman of Afghan Cricket Board, saying that the government wants to assign him to another important position.

Atif Mashal graduated from the American University of Kabul in political science and public administration. He has nearly 12 years working experience in management and leadership. He started his career as a special assistant to the attorney general in Kabul. He has also served as director of Programmes Planning at Administrative Office of the Afghan president.