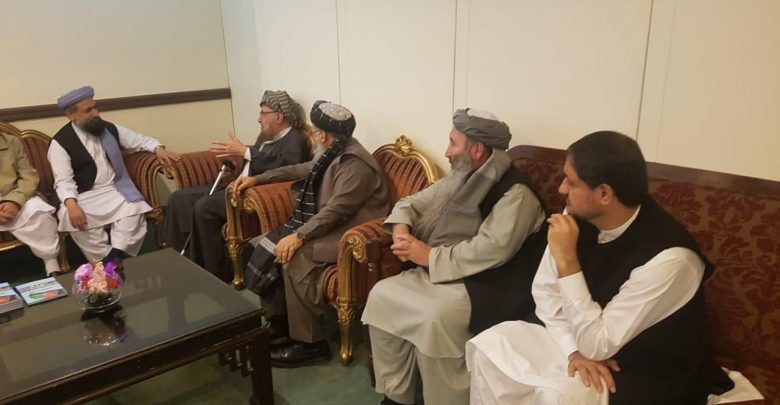 According to credible sources, the delegates held a detailed meeting with Maulana Sami Ul Haq, chief of Jamiat Ul Ulema Islam at Akora Khattak Nowshehra on Sunday whereas they held a meeting on breakfast with Jamaat Islami Chief Siraj Ul Haq at Islamabad on Monday morning. After holding the meetings, the delegates flew back to Kabul from Islamabad.

According to sources, the delegates remained for over two hours with Maulana Sami Ul Haq and exchanged views with him on ongoing situation of Afghanistan and requested him to help in the reconciliation process. Afghan diplomats serving in Pakistan also attended the meeting.

Responding to various proposals and suggestions, Maulana Sami Ul Haq said, “Afghan issue is very complicated, and several international forces including the U.S. are reluctant to resolve it.” He however said that he also wanted an end to internal violence and hostilities in Afghanistan.

According to sources, he also suggested a meeting of Afghan Ulema with Taliban leaders without involvement of the United States and Pakistan, whereas the two sides would understand each other’s point of views as well as could build up trust in each other.