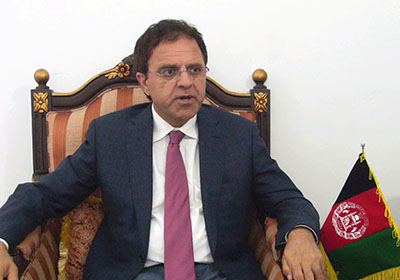 PESHAWAR, 08 May: Disputing the claims of Pakistan Army about the death of 50 Afghan soldiers in the clashes on Chaman border, Afghanistan ambassador to Pakistan Omar Zakhilwal confirmed the deaths of only two soldiers.

In a series of tweets on his twitter account, Zakhilwal said that only two Afghan soldiers were killed and seven others were injured in the clashes which erupted on Friday. 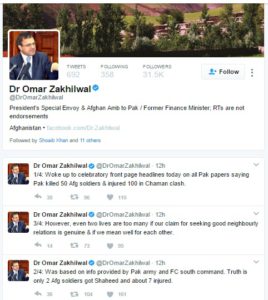 The Afghan envoy further said that the clashes also left deaths and injured on Pakistan side but they were celebrating it. Instead of celebrating, Zakhilwal called it unfortunate & regrettable.

Commenting on the incident he said, “even two lives are too many if our claim for seeking good neighbourly relations is genuine and if we mean well for each other.”

Meanwhile, following the deadly clash on the border, both Pakistan and Afghanistan governments have agreed to conduct a geological survey in the two villages – Jahangiri and Luqman, where the skirmishes had taken place.

According to media reports, Pakistani military had made it clear to the Afghans that the two villages belong to Pakistan.