Home Features & Interviews What changed the life of Qandi after she became a refugee in...
Facebook
Twitter
WhatsApp
Email

PESHAWAR: Qandi Safi, hailing from Kandahar province of Afghanistan, decided to migrate to Peshawar along with her husband and child in 1998 when the Taliban after overtaking the country banned women from stepping outside their homes.

Qandi Safi’s husband was running a business of cultural dresses of women, but the ban on women’s activities affected his business badly and he decided to shift to Peshawar. The family found a peaceful environment in Peshawar from which they took full benefit.

After observing and studying women’s rights organizations for 20 years, Qandi Safi finally also joined the field. “I launched a movement titled ‘Waak’ which means ‘the right’ to decide for themselves to be given to women. Our movement works for women’s rights and creates awareness among women for their rights,” she said while talking to TNN.

Qandi Safi said her institution has started working from KP and elected office holders for various districts. She said the women volunteers of her organization visit different houses and create awareness among women about their rights besides holding rallies and arranging other events. She believes that Afghanistan needs such organizations more than Pakistan because women there are less educated and they have less access to basic rights.

Ms Safi said she has witnessed a marked improvement in women of KP for raising voice for their rights as now they are well educated and they also seek their share in property. She said rural women have still a long way to go as compared to urban-living women, but unfortunately this journey of rights has not initiated in Afghanistan at all. 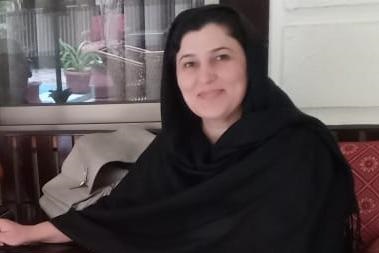 Qandi Safi said she along with a team of women went to a village in Afghanistan as part of her movement’s awareness campaign where a well off person received her team and took care of them very well and also gave them gifts, but when she entered his house and saw the condition of his two wives and 10 children, it was a shock for her.

She said the younger wife of the host and his elder daughter from the first wife had same ages and it was quite evident from their worn out clothes and shoes that they were in miserable condition. She said similar is the condition of most women in Afghanistan which compelled her to initiate Waak campaign.

Ms Safi said her children are not willing to go back to Afghanistan although the situation is much better there now. She said she can never forget the hospitality and love of Pakistani people, but recently she has also witnessed some hatred and negative feelings for Afghans which is a cause of grave concern for her family. Despite harassment from police and citizens, she said, her family is more comfortable in Pakistan and doesn’t want to go back.

The Afghan woman said there are many problems for women in Pakistan, but she could not criticize it because the problems of Afghanistan are even worse. She said her Waak movement is for all Pakhtun women of Pakistan, Afghanistan and elsewhere.

She said the purpose of her movement is the bring all Pakhtun women under a single banner to fight for their rights. She said members of the movement pay from their pockets and work for creating awareness against stereotypes and promote positive thinking in the society and remove misconceptions in the world about Pakhtuns.