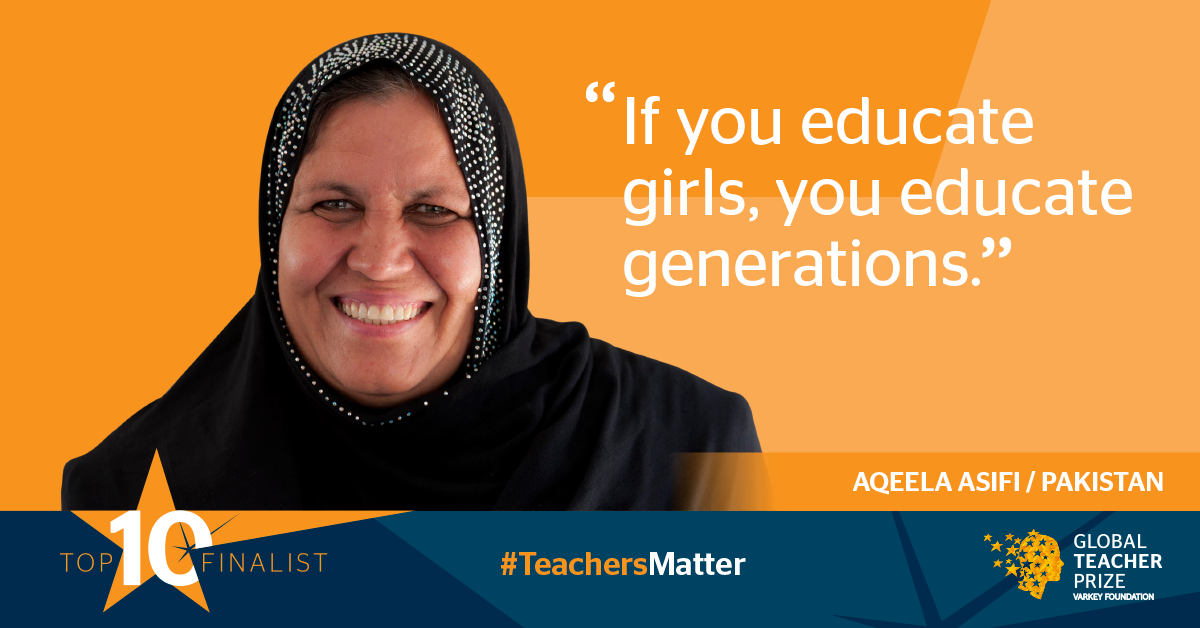 PESHAWAR, 18 February: The representative of the UN refugee agency (UNHCR) in Pakistan Indrika Ratwatte has congratulated and paid rich tribute to Aqeela Asifi, an Afghan refugee teacher who has been included in the top 10 shortlist for the Varkey Foundation Global Teacher Prize 2016.

The Afghan refugee teacher, who teaches children at the Kot Chandana refugee camp, Punjab, also won the prestigious 2015 UNHCR Nansen Refugee Award for her extraordinary humanitarian work on behalf of refugees. She has been recognised for her brave and tireless dedication to promoting education for Afghan refugee girls in Pakistan — while herself overcoming the struggles of life in exile.

According to a press release, the UNHCR representative said Aqeela Asifi truly deserves to win the Global Teacher Award. “I am inspired by her strength of conviction and perseverance to pursue a cause that she truly believes in,” he said.

“Aqeela’s story exemplifies the power of an individual to institute change and goes on to show that empowered refugees make significant positive contributions to the benefit of all. It can serve to further highlight the efforts of the Government of Pakistan in its commitment to meet the Sustainable Development Goal #4 of ensuring inclusive and equitable education for all,” he said.

In an extraordinary story of bravery and determination against all odds, Aqeela Asifi made it her mission over more than 23 years in exile to bring education to refugee girls in a remote community in Pakistan.

The Global Teacher Prize, widely referred to as the Nobel Prize for teaching, was set up to recognise one exceptional teacher who has made an outstanding contribution to the profession as well as to shine a spotlight on the important role teachers play in society. By unearthing thousands of stories of heroes that have transformed young people’s lives, the prize hopes to bring to life the exceptional work of millions of teachers all over the world.

The top ten have been narrowed down from 8,000 nominations and applications from 148 countries from around the world. By highlighting their stories the Varkey Foundation hopes that the public will be able to join in passionate debates about the importance of teachers and education. The winner will be announced at the Global Education and Skills Forum in Dubai on Sunday, 13 March, 2016.

Born to a liberal family in Kabul and educated in Kandahar at the time when education in Afghanistan was free and for all, Aqeela Asifi trained as a teacher but was forced to leave the country when the Taliban took over in 1992. When she arrived as a refugee at the Kot Chandana camp in Pakistan there were no operational schools in the local area. Strongly conservative attitudes meant the education of girls was frowned upon and female teachers were unheard of.

Aqeela set up a school in a borrowed tent and worked hard to overcome resistance and negative attitudes. Twenty families agreed to their daughters being educated and Aqeela initially focused on teaching noncontroversial subjects such as personal hygiene, home management skills and religious education. After gaining the trust of the community, Aqeela was able to introduce literacy, Dari language, mathematics, geography and history. There was no money for resources like blackboards so Aqeela stitched pieces of cloth with handwritten text to the tent walls and wrote books by hand at night. Her students traced their first words in dust on the floor.

Today, and owing largely to the support by the Government of Pakistan, there are nine schools in the camp with many female teachers and over 1,500 students including 900 girls. With education, early and forced marriages in the community have declined. Aqeela’s school has produced over 1,000 graduates (mainly Afghan refugee girls, but also local Pakistani children). Some have become doctors, engineers, government officials and teachers in Afghanistan.