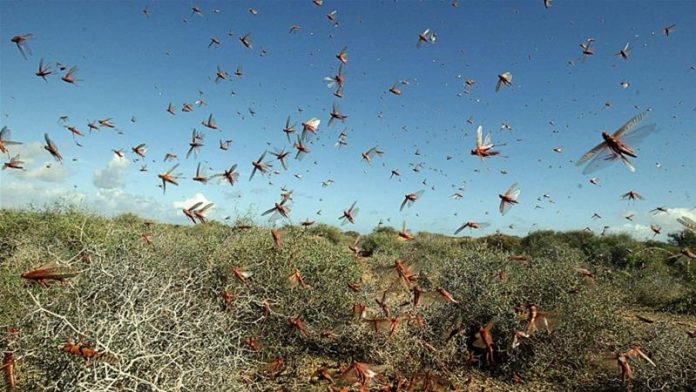 TNN correspondent reported that locusts have attacked standing crops and orchards in Alikhel, Mulakhel, Ghaljo, Dabori, Khadezai and Mamozai areas and caused massive damages due to which the farmers are highly perturbed. Particularly, the wheat crop is severely damaged by locusts and it is feared that agricultural production this year will be much less as compared to previous year. It is also feared that the situation may lead to food shortage in areas where locusts have attacked crops and orchards.

Locusts are attacking fields in a pattern as they immediately shift to another place after playing havoc with fields in one area. In Pakistan, locusts originated from Thar desert and while traveling from Southern parts of Punjab, entered in southern KP. Locusts first made entry in KP through Dera Ismail Khan after which they also reached Lakki Marwat district. In tribal districts, locusts first attacked crops in Kurram district from where not they have reached Orakzai district. The insects are spreading very rapidly from southern districts to tribal districts, while no major steps have been taken by the government to tackle the issue.

The area people said the remaining crops will also be damaged if timely measures were not taken to control locusts. They said locusts have entered the area in great numbers. They said the issue seems to be out of control of the Agriculture Department.

The local farmers are employing different traditional techniques to get rid of locusts, but these techniques are not yielding desired results.

An official of the Agriculture Department while talking to TNN conceded that the Department has failed in controlling locusts mainly due to financial constraints and non-availability of required equipment. However, he said, efforts are being made to overcome the challenge in available resources.

People of the area said locusts will eat up every plant in the area if timely measures were not taken to control them. Such a situation may lead to food crisis in the coming season. They lamented that agriculture seems to be the last on priorities list of the government.