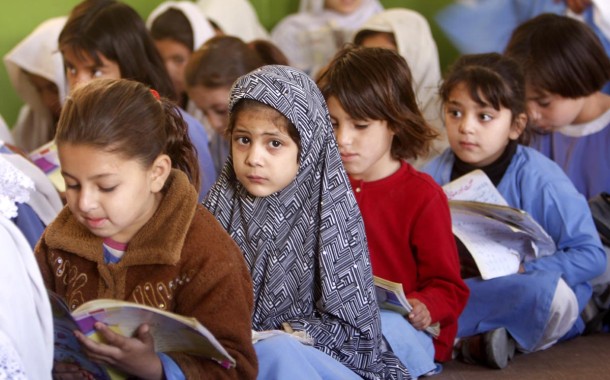 PESHAWAR, Pakistan – Lubna Zahid Khan, 8, sits cross-legged on the dusty ground, listening to her teacher give the day’s lesson. Her school used to be a big building, with four classrooms. But it was destroyed by the Pakistani Taliban in 2012, and the government has not gotten around to building a new one.

Khan and her classmates were moved to a rented two-room house nearby. But the building is in such disrepair, the teachers and students prefer to have their lessons outside.

Every day, the children go to school with no running water, no electricity and no toilets. On hot days, they study in the shade of a tree in the building’s courtyard. But when it gets cold, they will have only the clothes on their backs to keep warm.

Khan lives in Badabher, which is a rural area of Peshawar in Khyber Pakhtunkhwa province and sits adjacent to the tribal belt – a region bordering Afghanistan that is considered a hotbed of terrorist activity.

It was in the Swat Valley, also in Khyber Pakhtunkhwa province, where education activist Malala Yousafzai was shot through the head by Taliban militants due to her work campaigning for girls’ education.

The Taliban has controlled parts of Pakistan for the past 11 years, attacking and destroying hundreds of schools in the area. Thousands of schoolchildren have dropped out as a result of the violence. “Many of my friends left education because of the militants’ intimidations, violence and bombings,” Khan says.

“We fetch water from a nearby state-run boys’ school. And to answer the call of the nature, we have to go to our homes.”

The Pakistani army officially reclaimed the areas of Khyber Pakhtunkhwa province that were under the Taliban’s control in 2015, but the group, as well as Lashkar-e-Jhangvi and other jihadist militant groups, continue to operate in the region. In a report released in March 2017, Human Rights Watch says terrorist activity in the province has forced more than 900 girls schools to close, depriving 120,000 girls of an education and causing 8,000 female teachers to lose their jobs.

The Global Terrorism Database has found that insurgency attacks on schools in Pakistan between 2007 to 2015 have left 392 people dead.

Those attacks have only exacerbated an already struggling education system, with schools across the province falling apart and unfit for use. Najiullah Khattak, media adviser to the Khyber Pakhtunkhwa provincial government, says a total of 860 schools in the province were either damaged or destroyed by militants between 2007 and 2016.

But those only account for a small portion of the dilapidated schools in the region. According to official data, a total of 3,816 government primary schools are missing boundary walls, 3,486 have no toilets and over 9,000 schools are operating without electricity.

Neeba Jan, a teacher at another school in Badabher, says it took a long time for the terrified students to agree to come back after the Taliban attacked the school in 2012. Now, she says, 80 students gather each day in a makeshift classroom in the dilapidated house which the teachers rent for around $20 per month.

She remembers some horrific raids by the anti-education militancy on schools around the country, including the Taliban’s massacre of 150 students and teachers at the Army Public School in Peshawar in December 2014.

These days, normalcy has returned to the area, Jan says, and the provincial government is working on reconstructing many of the schools the Taliban destroyed. Khattak, the government media adviser, says that out of the 860 schools attacked by the militant group, 761 have already been reconstructed. “The work on the remaining educational institutions will be completed soon,” he says.

But for the students who have to try to learn in rundown rented houses or out in the open air, “soon” seems so far away. “There is no water or electricity in this school,” says 8-year-old Bisma Umar Farooq. “We fetch water from a nearby state-run boys’ school. And to answer the call of the nature, we have to go to our homes.”

“I miss my old school,” says Farooq, “and my classmates who have dropped out of the school because of fear.”

This story has been updated to clarify that the Taliban controlled parts of Khyber Pakhtunkhwa, not the entire province.

The Taliban may have been driven out of the area, but its legacy is still killing the chances of many children to get an education.

This article originally appeared on Women and Girls. You can find the original here. For important news about gender issues in the developing world, you can sign up to the Women and Girls email list.