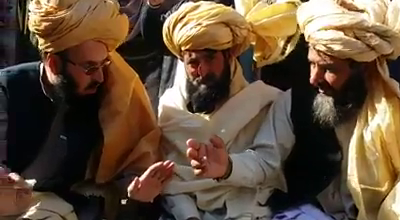 WANA, 19 November: The elders of Ahmedzai Wazir tribe of South Waziristan Agency have termed the reports of return of Taliban militants to the area as baseless.

Addressing a press conference in Wana on Friday, Malik Rehmatullah, Malik Sultan Wazir and other tribal elders said no pamphlets have been distributed in Wana. They said the area people have offered many sacrifices for peace in the region. They said a 120-member committee was formed after peace agreement in 2007 and 40 volunteers of the committee also lost their lives in different incidents, but then too some baseless reports were circulating in the media.

The tribal elders said the government writ has been restored completely in Wana and elders are fully cooperating with the Pakistan Army, Frontier Corps and political administration. They invited the national and foreign media representatives to visit Wana to have a clear idea about the facts on ground. They said some elements were trying to disrupt peaceful environment of Wana, adding that they will foil their nefarious designs.

Malik Mir Dil Khan said the purpose of the press conference was to clear misunderstanding about the situation in Wana.

“There is complete writ of government in Wana. We always approach the relevant forums whenever we have any complaints with the political administration, FC or military. We have nothing to do with irrelevant forums,” he said.

The press conference was held by the elders of Ahmedzai Wazir tribe after media reports few days ago stated that a group of Taliban in guise of Aman Committee has banned cultural and social activities in the area. Media reports said that group has also banned women from coming out of their houses without the company of male members of the family.