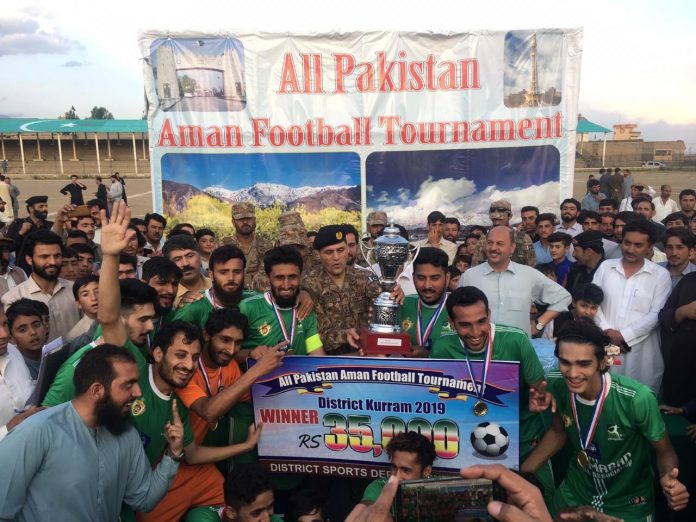 PARACHINAR: All Pakistan Aman football tournament concluded in Parachinar in which 20 teams from across the country participated. In the final, Lahore football club defeated North Waziristan club after a thrilling match.

The final match was played at the Sports Complex Ground where Lahore Club defeated the Waziristan Club by one goal to zero. A big crowd enjoyed the thrilling encounter between the two teams. Team members and coach of the Lahore football team expressed joy and said the TNN that they are extremely happy to play and win a tournament in the chilly weather of Parachinar. “We have been honoured of not only enjoying the weather of Parachinar but also win a tournament,” said the Lahore football team coach to TNN.

Ishaq Khan, the captain of Waziristan football club said that they played a very good tournament. He appreciated his team members and said that they have played a tremendous tournament; however, one team has to stand a winner. Khan said that they are well prepared and will try their best for future tournaments to earn a name for Waziristan that was affected by years-long militancy.

Amjid Ali Khan, the sports officer said that the weather in Parachinar is very suitable for sport; therefore, they have decided to arrange another sports festival in the district in which some 400 players from across the seven tribal districts will participate.

Army’s Brigadier Akhter Aleem who was the chief guest in the final, distributed prizes among the winning and runner-up teams.

Though Parachinar has been bestowed with the natural beauty which could attract tourists from across eh country, however, sectarianism and militancy had disrupted routine life in the area.  With efforts of local people and security forces, now peace has been restored. The arrangement of football tournament was in efforts in this regard to restore trust of people.