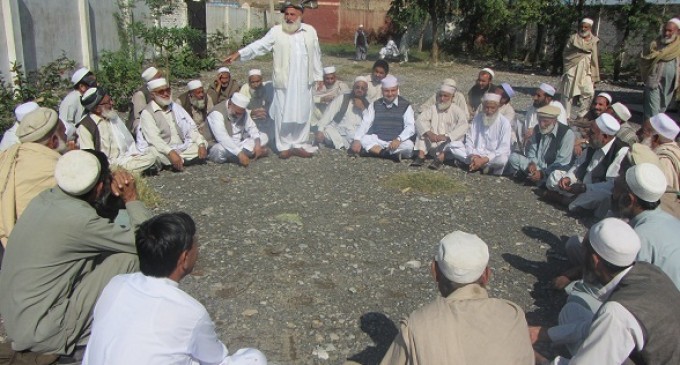 BANNU: The Political Alliance of North Waziristan tribal district has called an all parties conference (APC) over the issues of non-payment of compensation, return of temporarily displaced persons (TDPs) and border problems.

The provincial leaders of all the parties will attend the all parties conference. The conference will also discuss the issues of alleged rampant corruption in different departments of North Waziristan, compensation of damages after operation Zarb-e-Azb, opening of Ghulam Khan border, attitude of Customs officials and other problems.

The meeting of the political alliance was held at the hujra (male guest house) of general secretary Malik Akbar Khan in Mir Ali which was presided over by chairman Abdul Khalil Khan.

Malik Akbar Khan, Maulana Rasheedullah and Noor Aslam of the JUI-F, Malik Nisar Ali Khan of the ANP, Malik Rehmatullah of the PPP, Shafqatullah Dawar, Faseehullah and Sajjad Khan of the PkMAP and others addressed the meeting. They said convening of the all parties conference in North Waziristan is the need of honour. They announced that the conference will be held in October which will be participated by provincial leaders of all political parties.

The political leaders said peace has not returned fully in North Waziristan and corruption is rampant which is impeding development of the region. They said patrolling of police must be initiated in the area to ensure peaceful environment. They said the political alliance is raising its voice for the rights of people and will continue to do so till achievement of its goals.

The political leaders said Ghulam Khan border must be reopened for trade on both sides and Customs staff at Khajori check post must be changed. They said arrangements must be made for immediate return of the remaining TDPs to their homes and elected representatives must be made accountable over usage of their funds.