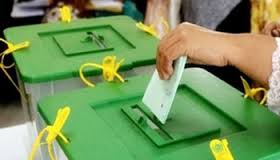 By Usman Khan
PESHAWAR, 29 May: The local government elections are set to be held in Khyber Pakhtunkhwa tomorrow, as the Election Commission (EC) has made all the necessary arrangements in this regard.
More than 11,000 polling stations have been set up for over 10.3 voters across the province. A total of 84,420 candidates are in the run for 40,762 seats. The EC has started sending ballot papers, ink, ballot boxes and other necessary items to the polling stations. Besides, security personnel have also been deployed at polling stations.
Similarly, magisterial powers have also been delegated upon the presiding officers, empowering them to fine and imprison those found involved in hindering the smooth functioning of polling process.
The Khyber Pakhtunkhwa government has also released 350 million rupees to the Police Department for transport, fuel and food requirements. Meanwhile, the EC has taken strong exception to the bids aimed at disenfranchising the women voters. The commission directed the provincial government and presiding officers to monitor such moves. It said that those stopping women from exercising their right to vote would be dealt with sternly.
It is the third local government elections since the creation of Pakistan. The last elections were held during Musharraf era in 2005.