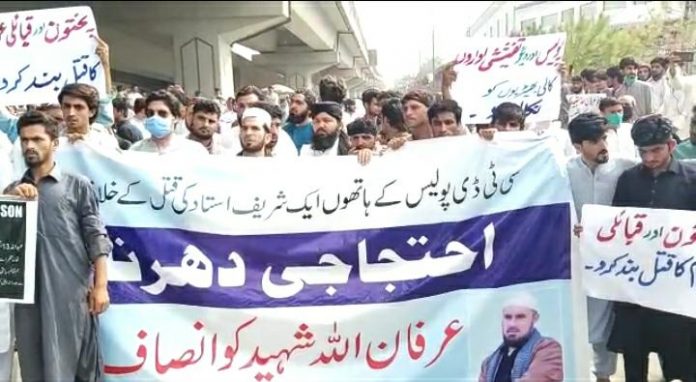 PESHAWAR: Bara Political Alliance, which was staging protests over the alleged fake encounter of a citizen, Irfanullah Afridi, says all its demands have been accepted by the government.

The protesters and the government have agreed on some points to find a solution to the issue and final announcement to this effect is expected at another Jirga latter in the day.

The protest of people of Khyber tribal district against the alleged extrajudicial killing of Irfanullah Afridi continued for eighth consecutive day on Tuesday. The protesters after staging a sit-in in Bara moved towards the Khyber Pakhtunkhwa Assembly. The protest outside the KP Assembly was attended by leaders from different political parties, civil society members and social activists.

The Political Alliance spokesman Chiragh Afridi said the commissioner Peshawar held negotiations with a delegation of the protesters and talks remained successful and all the demands of the Alliance were accepted.

The spokesman said the main demands pertain to filing of FIR of the extrajudicial killing of Irfanullah Afridi, declaring him a martyr and punishment for personnel involved in his murder, stopping security and civil institutions from direct action inside Khyber tribal district and end to extrajudicial killings. Member KP Assembly Shafiq Afridi played the role of mediator between the Political Alliance and commissioner Peshawar.

Chiragh Afridi said people from all parts of KP, particularly Khyber tribal district, attended the protests and made their demands were loud and clear that Irfanullah Afridi’s family must be provided justice.

The sit-in, which is continuing for the last eight days, will end today (Wednesday) with a joint prayer (Dua). After the end of protest, the officers of the relevant authorities will visit the home of Irfanullah Afridi for condolence with his family.

Irfanullah went missing from Jamrud area of Khyber district on June 01. He was in Jamrud to receive his appointment letter as a government teacher. Family sources said Irfanullah had two Master’s degrees and he was teaching in different private educational institutions as a religious teacher. The Counter Terrorism Department (CTD) on June 23 claimed that it had killed four terrorists in an operation and Irfanullah was one of them.