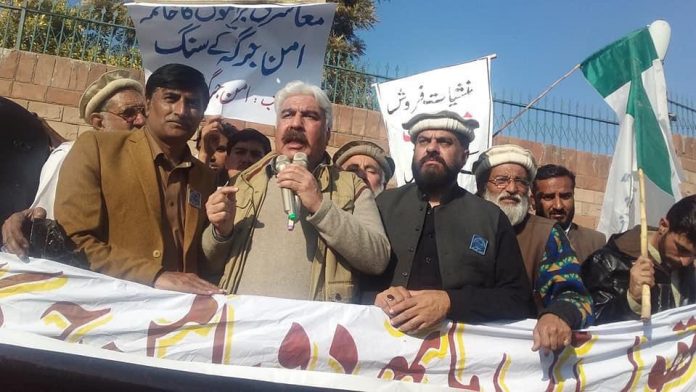 PESHAWAR: The Khyber Pakhtunkhwa Aman Jirga held a rally against the narcotics business and the prevailing interest-based economic system in Peshawar on Saturday.

The rally was led by provincial chairman of Aman Jirga Syed Kamal Shah which initiated at the Peshawar Press Club and ended at the Governor House. While addressing the rally, Syed Kamal Shah said the Aman Jirga will continue to raise its voice against the interest-based system and narcotics in the country. He said the use of ice drug has increased to an alarming extent which is a matter of grave concern. He said the government should take steps on emergency basis to control the menace before it is too late. Kamal Shah said a society ridden by the narcotics cannot make progress and development.

Other elders while speaking on the occasion that the young generation was indulging towards narcotics. They said an effective strategy was needed to bring the situation under control. They said effective and strict action was needed against the drug peddlers and they should be awarded exemplary punishment. They said the Khyber Pakhtunkhwa government has taken commendable steps towards legislation against the use of ice drug. However, they said delay in finalisation of the legislation is beyond comprehension. They said practical steps are needed to rid the society of narcotics.

They said the interest-based system and narcotics are crippling the society and causing increase in crime ratio. They said the system cannot be improved without addressing these issues.