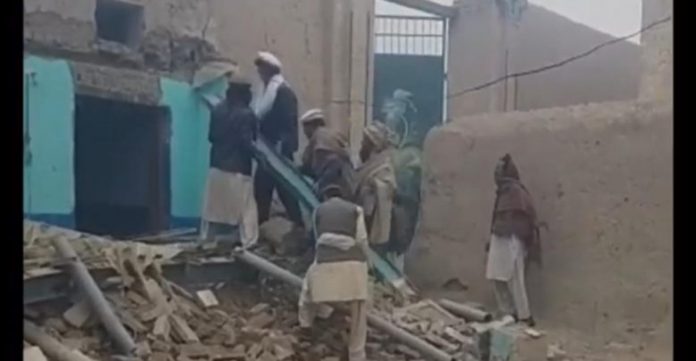 BARA: An enraged tribal lashkar (militia) on Friday set on fire and demolished three houses of the accused allegedly involved in kidnapping and murder to two young brothers in the remote Tirah valley of Khyber tribal district.

The bodies of two young brothers, who were kidnapped few days ago, were found on Thursday. Local sources said the bodies of five-year-old Asif and seven-year-old Munsif, sons of Shafiq Afridi, were found from a well near a mosque in Narkhao area. The incident has created an atmosphere of gloom in the area and local people started protest.

The angry mob then raided the three houses of the accused, Mughal Shah and Jehangir, set them on fire and demolished them, and also cut their trees as ‘revenge’. The vehicles of the accused were also reportedly burnt and police did not intervene .

After the bodies were recovered on Thursday, District Police Officer (DPO) Khyber reached the site of the incident immediately. Eighteen suspects were arrested and they are being investigated.

On March 10, two young brothers were kidnapped in Tirah valley and it was speculated that they were kidnapped allegedly by their close relatives to usurp their property. The people of four tribes of the area were infuriated over alleged lack of cooperation from the administration in recovery of the two kidnapped brothers and they staged a sit-in outside the administration office to record their protest. The protesting tribesmen also closed all the bazaars and markets.

The area people said Asif and Munsif, sons of Shafiq Afridi, went for tuition as per routine on March 07, but did not return home. The father of the kidnapped brothers alleged that his sons were kidnapped by his cousins. He feared that his young sons would be killed by his relatives for usurping his property, and his fears eventually turned out to be true.

Shafiq Afridi said he was with his ailing mother at Lady Reading Hospital Peshawar when he got information about his sons going missing. He said he had to leave his ailing mother alone and started search for his sons, but in vain.

Local sources said the administration had also arrested one cousin of Shafiq Afridi on suspicion of involvement in kidnapping. However, all the efforts and protests went in vain as the little brothers were eventually killed by the kidnappers.