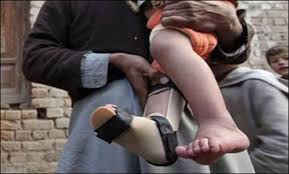 PESHAWAR, 22 April: Another child has been infected by poliovirus in Khyber Pakhtunkhwa province of Pakistan.

According to the National Institute of Health (NIH), poliovirus has been confirmed in eight-month-old Hazrat Gul from Sheikh Muhammadi area of Peshawar. With the emergence of new polio case, the tally of polio cases in Pakistan has reached 22 this year. Nine among the affected children belonged to KP.

Despite massive vaccination campaigns in Pakistan for the last many years, the crippling disease still threatens future of children in the country. Polio cases had been reported mostly from those areas in Pakistan where vaccination efforts were hampered due to threats from militants.