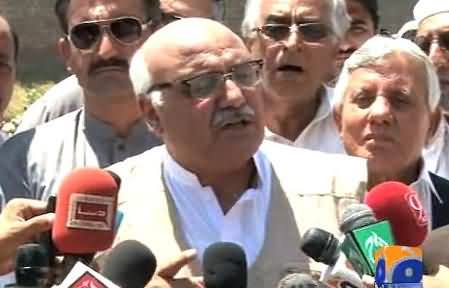 PESHAWAR: Central General Secretary of Awami National Party (ANP), Mian Iftikhar Hussain on Monday while announcing the schedule for party elections in the four provinces said that the intra-party election for the election of central leadership would be held on May 2.

Addressing a press conference here in Peshawar, Mian Iftikhar Hussain said that party election in Khyber Pakhtunkhwa would be held on April 10, Punjab on April 12, Sindh on April 14, Balochistan on April 17 and Saraki Unit on April 20 while the election for central leadership on May 2.

Flanked by Syed Aqil Shah from Khyber Pakhtunkhwa, Shafiq Ahmed from Punjab, Younis from Sindh and Daud Achakzai from Balochistan, Mian Iftikhar Hussain said that the Awami National Party believes in a transparent conduct of party elections and gives right to party workers to elect their leaders in the party without any pressure and discrimination from the party leadership.

He urged the other political party of the country to promote and encourage transparent party election and give the right to political workers to elect their party leader instead of imposing one on them.

Later, the ANP leader deplored that the assassin of his only son has been apprehended and has confessed to the crime but he is still not punished according to the law of the country. His 26-year-old Mian Rashid Hussain was shot by two men on a motorcycle as he walked outside his house in Pabbi in 2010. Mian Iftikhar asked for justice and said that his son was killed in 2010 but still the murderer was not being sentenced.