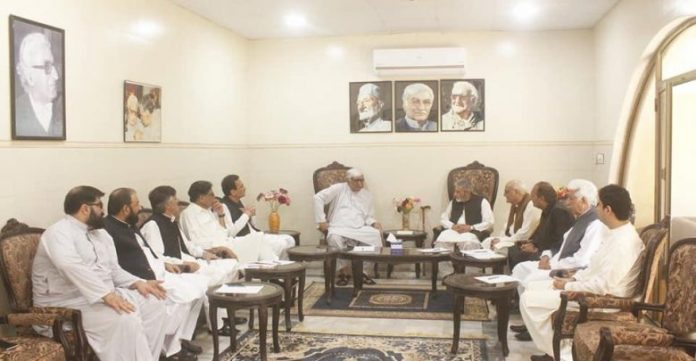 PESHAWAR: The Awami National Party (ANP) will be the part of the ‘Azadi March’ and Asfandyar Wali Khan will lead the party procession to Islamabad from Rashakai interchange. This was decided during the party’s Think Tank meeting held here in Wali Bagh Charsadda on Friday.

The party leadership has issued instructions to all provincial units to be part of the march on October 31, depending on the circumstances of their respective provinces. During the meeting a detailed discussion on the country’s political situation and independence march.

After consultation meeting, a statement was issued stating that the March was is the constitutional and legal right of all opposition parties, hoping that the obstacles that the government has placed on all routes would be immediately removed and political workers would be allowed to hold a peaceful protest.

The statement further said that the ANP has a serious concern over the current inflation, unemployment and economic situation in the country. The meeting also expressed strong concern over the news regarding the health of former Prime Minister Mian Muhammad Nawaz Sharif and former President Asif Ali Zardari and also condemned the statements made by the government ministers in this regard.

In his statement issued from Wali Bagh Charsadda after the meeting, Asfandyar Wali Khan said that the economy has come to the brink of collapse today. The meeting hailed the decision of the Peshawar High Court to declare the ‘Action in aid civil power ordinance’ void but also condemned the KP government for challenging the PHC decision in Supreme Court of Pakistan.

In the end, Asfandyar Wali Khan emphasized the Afghan government’s inclusion in Afghan peace talks, saying that Afghan peace talks should resume immediately. He asked for eliminating the distrust between Pakistan and Afghanistan and that is only possible when efforts are made from both sides. He said that China, Russia, the United States and Pakistan should be the first facilitators in Afghan peace talks and that when the agreement is reached between the parties, these countries will have to play a guarantor role.