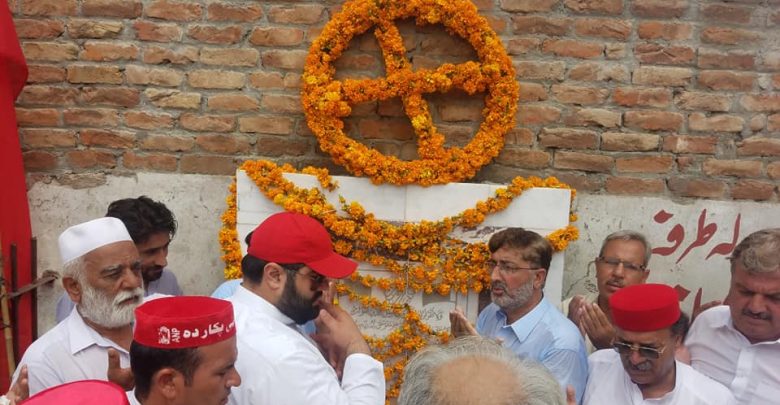 The event was organized at Ghazi Gul mosque where ANP chief Asfandyar Wali Khan and others addressed participants.

On 12th of August 1948, the then provincial government of NWFP led by Dr. Khan Sahib was dismissed and a Muslim League leader Abdul Qayyum Khan was appointed as the Chief Minister of the province.

The new CM arrested ‘Khudai Khidmatgaar’ leader Bacha Khan, who was a passive social reformer, along with Dr. Khan Sahib, Qazi Attah-ullah, Arbab Abdul Ghafoor Khan and other notable figures of the region. The arrested leaders were tortured and their properties confiscated.

A new ordinance was promulgated in July 1948 by the provincial governor, which authorized the government to detain anyone indefinitely and confiscate their properties, without disclosing the reason. The detainee was not allowed to challenge his arrest in court.

To protest against this, activists of Khudai Khidmatgaar decided to lead a peaceful procession march from Charsadda to Babrra on 12th of August 1948. The march was announced ahead in newspapers, and all participants were told to come empty-handed, to not even hold a stick and to congregate in Charsadda and march peacefully to Babrra.

They were informed of police presence, but not knowing what lay ahead they continued towards Babrra grounds. When they reached there, the police opened fire on them. The crowd was so large that despite the shooting the march continued but after incessant shooting, scores were reported dead and drowned in the river.

Some women, after witnessing the gruesome massacre being perpetuated, are remembered to have rushed to the ground bearing the Holy Quran on their heads in an attempt to stop the police from firing.

In this way, unarmed men and women of all ages were massacred. Their dead bodies were thrown into the Kabul River and when the police left, the bodies were recovered by loved ones and taken to the Charsadda Baazaar.

Those injured or whose loved were killed in this massacre, are recorded in stories as having been fined for the bullets that the government had spent on killing them. In September 1948, the then Chief Minister, Abdul Qayyum Khan gave a statement in the provincial assembly:

“I had imposed Section 144 at Babrra. When the people did not disperse, the shots were fired at them. They were lucky that the police’s ammunition ran out; otherwise not a single soul would have survived” Then hinting at the four members of the opposition in the provincial assembly, he said:

In 1950, Suharwardy, the president of Awami League, said in a large gathering in Dhaka that events in Charsadda surpassed the 1919 massacre committed by British in ‘Jallianwala Bagh’.