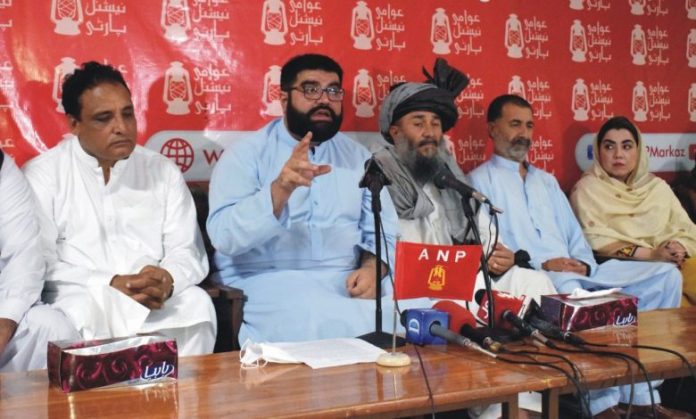 The ANP leader said merged districts haven’t received their 3 percent share in the National Finance Commission (NFC) Award, while Rs100 billion annual development funds have not been provided either.

Addressing a press conference at Bacha Khan Markaz in Peshawar along with members of the committee formed to resolve land disputes in merged districts, Aimal Wali Khan said the nine-member committee led by Member KP Assembly Nisar Mohmand and having representation from all tribal districts is working tirelessly to resolve disputes in the area. He said there is an old standing land dispute between Mehsud and Betani tribes in FR Jandola, and the committee members are working to find an amicable solution to the dispute.

The ANP provincial president said the South Waziristan people are demanding opening of Angoor Adda corridor on the Pak-Afghan border for promotion of trade activities. He said the local people also have reservations over cutting of forest wood in North Waziristan and use of substandard material in construction of shops and markets.

Aimal said there are some demarcation issues in Orakzai district as well. He said some people in Orakzai have illegally occupied coalmines. He said the problem relating to coalmines in Darra Adamkhel was resolved, but it resurfaced due to lack of interest by the administration and now two tribes are again face to face. He said the government’s promise of establishing an industrial zone in the area remains unfulfilled.

The ANP leader said militants are regaining foothold in Bajaur, but the relevant authorities have turned a blind eye towards the situation. He alleged that extortions are being received in Bajaur with impunity.

About Khyber district, Aimal said Kokikhel tribesmen are holding protest for last several months but they are not being given the status of temporarily displaced persons (TDPs). He said all trade routes with Afghanistan must be opened as KP’s economy depends on it. He said the demarcation dispute between Mohmand and Bajaur must be resolved without further delay.

He demanded fresh survey of all the damaged houses from Bajaur to Waziristan so that no person suffering damages is left out from compensation.