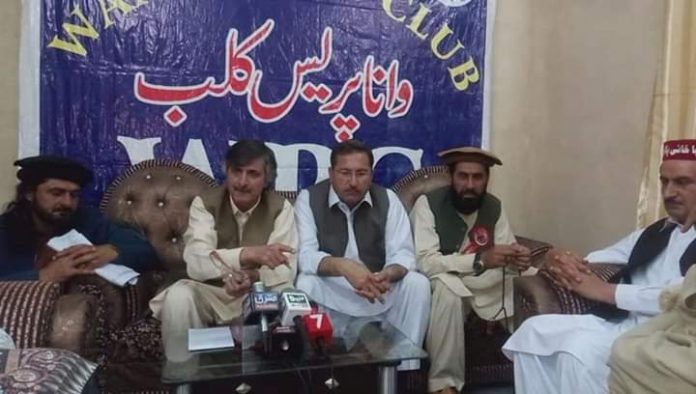 WANA: The Awami National Party (ANP) has demanded the government to take steps on emergency basis for rehabilitation and infrastructure building in the tribal districts which have been affected by 16 years of militancy.

The ANP parliamentary leader in the Khyber Pakhtunkhwa Assembly and provincial secretary general Sardar Hussain Babak said while addressing a press conference at Wana Press Club in South Waziristan tribal district on Thursday that the Pakhtuns in the tribal districts suffered a lot due to militancy. He said the owners of the damaged houses must be compensated without delay.

The ANP leader said the people of South Waziristan face trouble while making entry through Gardawi check post. He said all the Pakhtuns coming to South Waziristan are peace-loving and patriotic and they should get rid of this check post now.

Mr Babak said hundreds of people in Wana sub-division, including women, were rendered disabled due to militancy and military operations. He said all the disabled people must be issued special identity cards and they must be given all facilities. He said the Levies and Khassadar personnel have offered countless sacrifices for the country, therefore, they deserve equal privileges and status like the police force.

During the press conference, the ANP leader also pointed out a very pressing issue of landmines in the tribal districts. He said landmines have claimed several lives which must be removed to give a safe and secure environment to the tribal people.

Mr Babak said the royalty of the Gomal-Zam dam is the right of the people of South Waziristan and they must get this right without trouble. He said 3G and 4G internet service must also be provided in all the tribal districts.

He wondered why trade agreements were not being made with friendly Islamic state of Afghanistan, while on the other hand, similar agreements are in place with India, which is not so friendly with Pakistan. He said all the impendent of trade of the tribal districts with Afghanistan must be removed. He said promotion of Pak-Afghan trade will create job opportunities in the tribal districts and life standard of the people will improve.

He said Prime Minister should also implement his pledge of 3 percent share for the tribal districts in the National Finance Commission (NFC) Award.