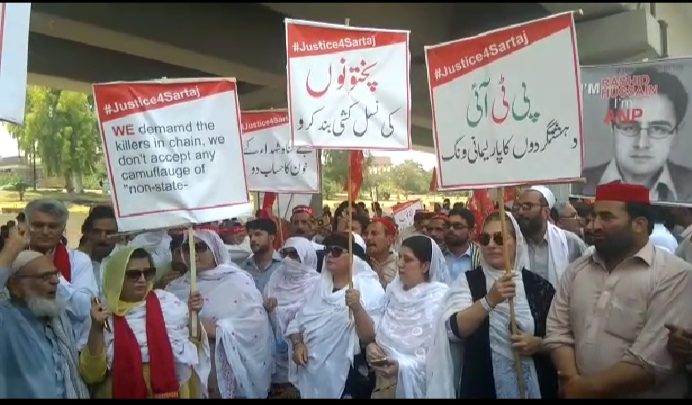 PESHAWAR: The leaders and activists of the Awami National Party (ANP) on Tuesday staged protest demonstration in front of the Khyber Pakhtunkhwa Assembly building against the murder of the ANP leader Sartaj Khan.

The ANP provincial president Aimal Wali Khan, Mian Iftikhar Hussain, Member KP Assembly Sardar Hussain Babak and other leaders of the party participated in the protest. Participants of the protest chanted slogans against the government for its failure to provide security to the ANP leadership which is under attack from miscreants.

The ANP leaders said during the protest that the party leaders and activists are under attack since long, but the government has failed to provide security to them. They said the culprits behind the murder of the ANP leaders and workers have not been arrested. They said the murder of the ANP city president Sartaj Khan in broad day light in Peshawar shows failure of the government.

Sartaj Khan was killed by unknown gunmen in Gulbahar area of the city on Saturday. Police said Sartaj Khan was alone in his car when he was approached by two motorcyclists on the main Gulbahar road and was targeted.

The ANP leader was shot inside his car in a targeted attack. “Apparently it was target killing as attackers didn’t take away his phone or wallet,” police said.

Sartaj was taken to Lady Reading Hospital (LRH) however; he had already breathed his last. LRH spokesperson said that the ANP leader was received dead at the hospital.

Police on Sunday filed a case about the murder of the ANP district president against unknown culprits.

The case was registered by Gulbahar Police Station on the complaint by Shamsul Taj, brother of the deceased ANP leader. Shamsul Taj said in the first information report (FIR) that he was present in Services Hospital when he received information about his brother’s murder. He said when he reached the Lady Reading Hospital (LRH) that owner of a general store told him that as soon as Sartaj sat in his vehicle after purchasing some items from the shop, unknown armed men came on motorcycle and opened fire on him. Sartaj received several bullet injuries and died on the slpot.

The brother of the ANP leader said they have no enmity with anyone.