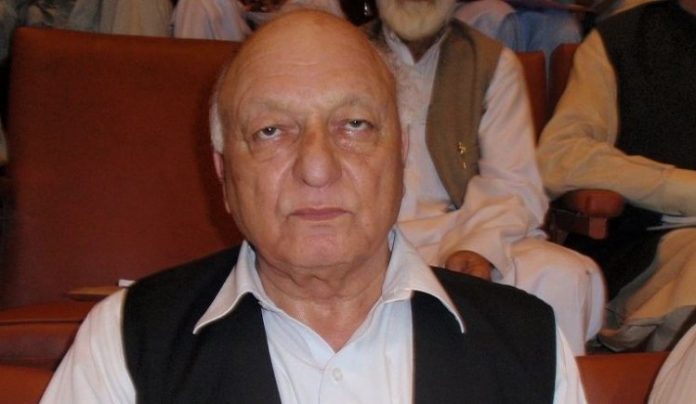 PESHAWAR: The Awami National Party (ANP) on Monday suspended the membership of its senior leader Abdul Latif Afridi for violation of party’s elections code of conduct.

The party has accused Afridi of supporting his son instead of party candidate during the July 20 election in tribal districts. He was issued show-cause notice however he did not submit any response due to which his basic membership was suspended. This was stated by a notification issued by the Awami National Party (ANP) provincial head Aimal Wali Khan from Bacha Khan Markaz, Peshawar on Monday.

On August 23, ANP issued show-cause notices were issued to Abdul Latif Afridi, Ayaz Wazir and Imran Advocate allegedly for supporting their relatives in tribal districts elections instead of party’s nominated candidates on their respective constituencies. In the showcase notice, Latif Afridi was told that according to sources in the party’s district organization and provincial organization, you support your son in the recent provincial assembly elections as an independent candidate instead of supporting party candidate.

On the other hand, senior lawmaker Abdul Latif Afridi and current president of the Peshawar High Court Bar in talks with TNN said he was happy with the party’s decision because a huge load has been lifted off my shoulders. Afridi said that he would resign from all the positions held by the party, including the presidency of the Peshawar High Court Bar.

In addition, the ANP provincial president also issued a show-cause notice to Senator Sitara Ayaz in which she was accused of violating party discipline and grouping in the party organization. Senator Sitara Ayaz was asked to submit response the notice within seven days.

The ANP has badly failed to garner votes in the first-ever election in tribal and won just one seat After its leadership has rejected the results of the poll.