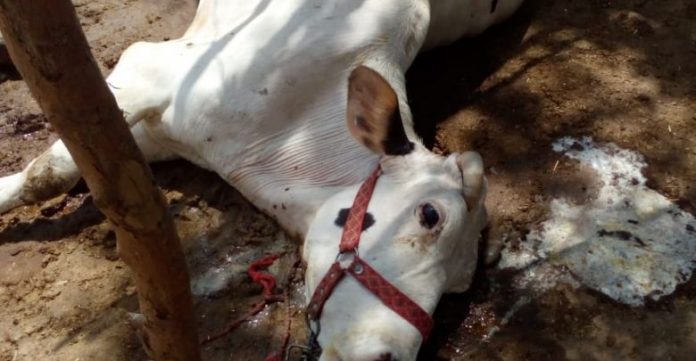 PESHAWAR: Just weeks ahead of Eidul Azha, livestock is hit by Anthrax virus killing dozens of cattle in Karman area of district Kurram on Wednesday. District Kurram veterinary officer Mazhar Ali has confirmed saying the cattle are hit by anthrax. The officer claimed that after the department was informed of about the outbreak, they visited the area to vaccinate cattle against the deadly disease.

Tribal elders of district Kurram, Malik Haji Nisar Hussian, Malik Dildar, Haji Mumtaz, Murtaza Turi and others said to the media that for the last few days, their livestock is dying due to a strange disease. The elders said that due to the virus the cattle get sick and die within a few hours. They added that due to illness, they are not only worried about their cattle but also about their own health.

A tribesman told TNN that he is a poor man and lost his cattle due to the disease within a few hours.

Malik Dildar urged the Khyber Pakhtunkhwa (KP) government that most the population of the district is comprised of poor having no enough resources but depended upon their cattle for their living. He added that the government should make immediate efforts to control the disease to prevent further loss to poor farmers. Malik Dildar also requested the government to provide financial compensation to affected farmers so that their source of living remains intact.

The veterinary official informed that they have taken the samples from dead cattle to Peshawar for tests and further analysis of the disease but still not received the report. He added the anthrax disease led to speedy death of cattle that’s why they are sure cattle were hit by anthrax. Mazhar Ali furthered that the spread of such virus was also reported a few years ago in district central Kurram which they controlled after through vaccinations.