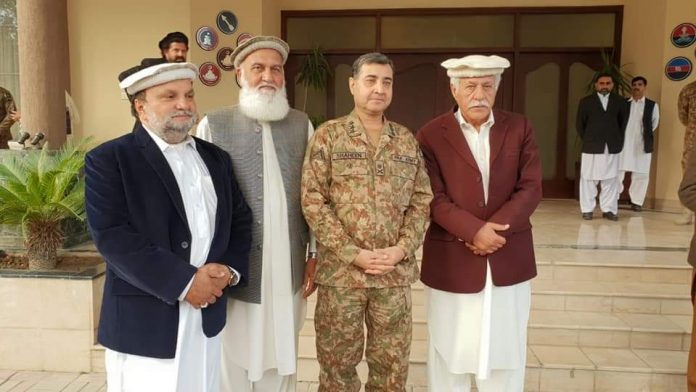 In this regard the Alliance leaders held a meeting with Corps Commander Peshawar Lt Gen Mazhar Shaheen on Tuesday and informed him about the grievances of the tribal people amid the ongoing merger process with Khyber Pakhtunkhwa.

The elders conveyed to the corps commander that the Fata Reforms Committee had no member from the tribal districts and undue haste was shown in the passage of 25th constitutional amendment. They said the bill was passed in four days which raised eyebrows. They said Frontier Crimes Regulation (FCR) was abolished and even a stricter law FIGR was imposed and that too was abolished for unknown reasons. They opined that only few clauses of the FCR were strict, otherwise, it was the best law in the world.

The elders said the establishment of a Fata Council was inevitable with representation of elders from all tribes to resolve local disputes. They said the Jirga system was the best system to provide speedy and inexpensive justice to people and this system should be retained in best interest of the tribal people.

The elders also complained that they were not taken into confidence over local bodies system in the tribal areas. They said any system which will be brought without taking the elders into confidence will not work. They said the Levies Force played a great role in bringing peace to the region and they have also offered numerous sacrifices, therefore, they deserve full reward and job security.

They said the people of tribal areas have the first right on dams built on its soil. They said focus must also be paid to rehabilitation and reconciliation in the tribal districts after the return of displaced persons.