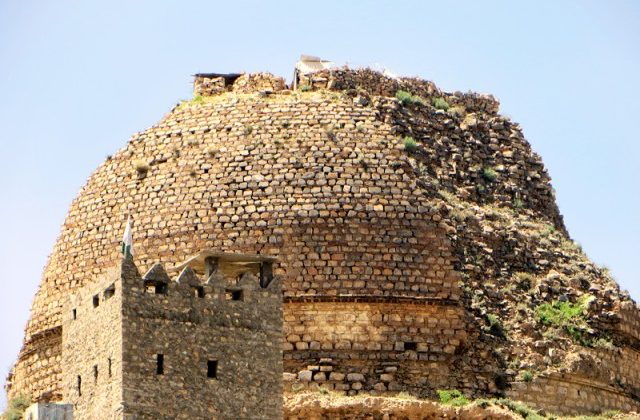 He said there are also artifacts of British era, but the relics of the ‘Stone Age’ are very precious and important and need to be preserved. “We have documented 20 to 30 Stupas and I am sure that proper archaeological surveys and documentation will help in exploration of more artifacts,” he said.

Referring to the Shapula Stupa, 50 feet high off the road and the historic Ali Mosque, historian Tipu Mohammad Khan writes in his book that it was built by Buddhist followers in the second century. The local people harmed the site in hope of searching a treasure. They dug and destroyed many artifacts in search of the treasure, which was not there.

Local historian Mehrab Afridi said while talking to TNN that many archeological sites in Khyber district like Shapula Stupa were affected due to government negligence. Many of the sites here show the ruins of the Ashoka period in the Pasadkhel area, but no concrete steps were taken to protect the archaeological site. He said when people came to know about this area, they dug it out cruelly and damaged it.

Local elder from Zakhakhel, Landikotal, Malik Mohammad Shafi told TNN that many sculptures broke during digging when he was making constructions in his area. He had no awareness about the importance of these sculptures and broke them thinking that these idols are not good for faith. He speculated that there might be countless other underground sculptures in the area.

Khyber Pass is not only a national highway, trade route, but a road of history, civilization and architecture. According to a 2017 survey, before merger, there were about 132 archaeological sites, Stupas, tunnels and forts. There are remains of Gandhara , Mughal era, Hinduism and Buddhism. But mainly there are many sites of British era.

Due to its geographical significance, the Khyber Pass had been the site of the arrival of fighters for hundreds of years, the traces of which exist even today. Below the Machine   check post is King Timor Ling’s Extermination Dam, (Phansi Gat). It was built in 1308 and remained in use until 1389. The rulers would tie a ‘traitor’ and then drop him from the top. This site still exists and people from different parts of the country come to see it.

No survey on archeological sites in Bara is carried out so far. Bakht Muhammad, a Researcher from Archaeology Department, told TNN that Khyber has great historical significance.  “We identified these by its architecture features. Mughal, British, Buddhism, Hinduism and Gandhara civilizations have different kind of architecture features. We have explored many sites in our survey which are not yet identified . We found many sculptures   from Khyber which are now in Peshawar Museum,” he revealed.

Jamrud Fort is under a three-year maintenance project of Rs500 million. Efforts are also being made to look for more artifacts at the site.

Dr Abdul Samad told TNN that survey was held in two tehsils of Khyber during which 132 artifacts were found in Jamrud. “We have completed half survey in Landikotal and documented 40 artifacts. Due to the war on terror operations in the area, we stopped the survey, but now we are planning to conduct a fresh survey in other tehsils of Khyber.

Under the laws of the United Nations, all populations’ signs are included in archaeology that are more than a hundred years old and their protection will be the responsibility of the respective government. If proper steps for preservation of these artifacts is taken, history will be preserved, and due to the interest of both domestic and foreign people in historical sites, this area will become a major tourist destination.